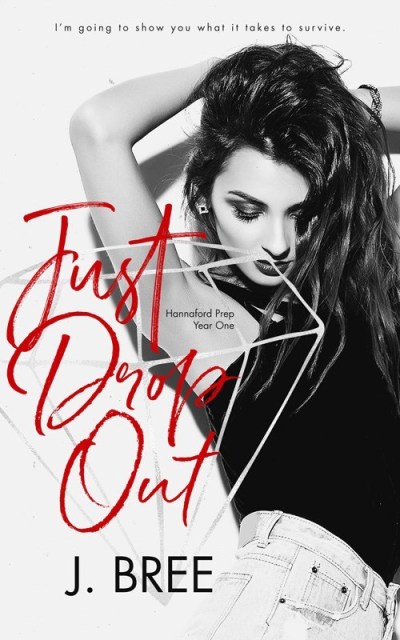 After surviving foster care and a high school that breeds gang members and drug dealers I’ve finally found my path to freedom: emancipation and a full ride scholarship at the ultra-exclusive Hannaford Prep.

All I have to do is survive.

After attracting the wrong sort of attention from the richest boy in the country, pissing off the hottest guy in school and being humiliated in front of my favorite rock idol I am now the target of the most popular, and cruelest, group in the freshman class.

They want my blood.
They can have it.
I’m stronger than any spoilt rich kid.

But can I survive the game the Juniors have started with me as the goal? Now every boy at Hannaford wants to have me.

All except the three I want.

Ash, Harley, and Blaise don’t care about the game, all they care about is destroying me.

This book was on sale and recommended by a friend so I pick it up. Now I’m totally hooked. I should have just bought it in the Complete Collection to begin with but alas I didn’t do that until today. It’s a great deal!

In book one we meet Eclipse ‘Lips’ Starbright Anderson aka the Wolf. We see how she earns diamonds and the name of Wolf before we even get into the story that happens within the walls of Hannaford Prep.

Attending Hannaford Prep on a full scholarship is what Lips considers her biggest break. It’s her ticket out of Mounts Bay and to a better life. She has every intention of getting a full scholarship to an Ivy League college when the time comes. What she doesn’t expect is the Beaumont family’s unprecedented reaction to her presence.

She fully expected to be snubbed, after all she’s a nobody. The length Avery Beaumont seems to be willing to go to get her to leave is truly over the top as is her control over the others attending here. Avery’s twin Ash pretty much ignores her but the biggest surprise for her is the guy she saw at the courthouse who appears very cozy with them.

Her first class is History and she finds she’s seated next to one Harley Arbour, the courthouse guy. Bringing up seeing him there and listening to his summer ‘antics’ is what initially gets her on Avery’s bad side.

Then there’s the oldest Beaumont sibling, Joseph, ‘Joey’, he starts up with freshman at that first lunch and shows just a bit of his true colors. He’s not a fan of his twin siblings at all.

Then one of the hardest blows, her idol Blaise Morrison from the band Vanth Falling, attends this school and is friends with the twins and Harley. To top it off he’s in her chorus class and even the teacher is gaga over him.

The bullying at this school is over the top, but all the adults just seem to ignore it. The second round of the bullying of Lip’s comes in the form of stealing her bag while she’s in the shower. Then the girls on her floor taking pictures of her as she walks back to her room naked. That of course ends up in the hands of all the guys in the school and now Lips has to deal with the fallout.

By the time I make it to breakfast on Monday, the photos—yes,photos—of my naked walk have been seen by the entire school. The first guy to approach me about it gets ignored, but the second guy gets a bloody nose. He made the mistake of telling me how much he wanted to watch my tits bounce while he fucked me, and I take note of his name when his friend calls out to him while he slinks away. Spencer Hillsong is a dick.

I don’t get approached after that. I eat breakfast in my usual spot, and there’s a three-chair buffer on every side of me, like no one is willing to risk my violence.

That is until Joseph Beaumont sits across from me again.

“I hope you’re not embarrassed, Mounty. I’m actually impressed with what you’ve got going on under the uniform. I didn’t realize your rack was so big.”

I don’t even glance up at him. I’m reading the last book I need to for Lit for the year, having spent the entire weekend studying like a fiend to keep myself distracted. I hadn’t gone to the dining hall to eat, so I’m starving, and my plate is overflowing with eggs and bacon.

“Aww, don’t be like that, Mounty. Nudes are an everyday thing here at Hannaford. I can show you mine, if you want. I’m quite the photographer.”

I would rather gouge my eyeballs out than see Joey’s dick. I think about telling him that, but it’s more appealing to ignore him until he fucks off.

“Cold shoulder, and I’m trying so hard. You’re a hard girl to befriend. I could deal with Avery for you, you know. Would that win me your trust?” he coos at me.

“No.” I look up at his cold, blue eyes. The color and shape are identical to his siblings, but they don’t feel the same. Looking into Joseph Beaumont’s eyes was like staring into a void.

I get the impression that this boy tortures his siblings for the simple pleasure of it, and I have no interest in being dragged into it. Besides, I was starting to get ideas of what I would do to Avery senior year when graduation came closer and my chances of being expelled were drastically reduced.

But I’d do it myself. I wouldn’t hide behind her evil brother.

“She speaks! Are we talking now, or are you insisting on freezing me out?”

“What exactly would you like to talk about, Joseph?” I put down my book and fold my arms. His eyes trace over my chest, and I clench my jaw because I know he’s thinking about the damned photos.

“Call me Joey; my father is Joseph. Let’s talk about my party. We’re going to the edge of the school boundaries, there’s a small woodland area that I’ve made my own. I’ll pick you up after curfew and personally walk you down there, so you don’t run into any trouble.”

I didn’t want to go to the damned party at all. How many of the guys would proposition me there? Would Avery and the boys be there, and would I get drunk and confront her? It was a recipe for disaster. I open my mouth to say so when Harley sits down next to me.

I glance around, but he’s alone.

“What the fuck do you want, degenerate?” Joey sneers at him. Harley looks at him the same way you would look at dog shit you’ve just stepped in. His uniform is crisp and new, so I guess Avery finally wore him down enough for him to replace his older one. He looks hot, but then he always does.

“Lips and I have a chemistry assignment to discuss.” True, but we had already finished the assignment. Neither of us leave things to the last minute.

“Well, fuck off and talk to her about it later. We’re busy.”

A slow smile works its way across Harley’s face, and he starts to eat his eggs. His plate is even bigger than mine. He’s a solid guy, but I get the impression it’s all muscle, so he must spend serious time in the gym. The image of him in a tank and gym shorts flits into my head, and I lock the image down fast. I do not need to get turned on surrounded by these assholes.

“I’m good here. Lips and I are regular desk buddies. She enjoys my company, you know. I don’t have to taunt her to get her to speak to me.”

Joey scowls at him, but I refuse to speak to either of them. Instead I pick my book back up and zone their bullshit out. Joey finally gets up and storms off. Harley doesn’t say a word, just eats his eggs and smells delicious.

“I don’t need rescuing.” I say as I turn the page.

He snorts at me.

“Everyone needs rescuing from Joey Beaumont. You shouldn’t be speaking to him. If he sits here again, get up and walk away.”

“Oh yeah, and what should I do if Avery sits here?”

Harley pauses and then puts his fork down. I watch as his face does a complicated dance before settling into what I think is an attempt at a sincere look.

“I know you won’t believe me, but Avery didn’t set you up, and she definitely didn’t take the photos.”

It’s my turn to snort. I give up on my eggs and start in on my apple instead. I kind of want to vomit thinking about how many people were looking and laughing at the photos. It’s bad enough that I have to put down the apple too.

“Think about it. Plus, I haven’t looked at them. If Joey actually gave a shit about your feelings, he wouldn’t have looked at them either. He’s a snake in the grass.”

No, he’s not in the grass. He’s a snake that’s wrapped around your throat. “You expect me to believe you care about my feelings?”

He pauses shoveling his food into his mouth and says, “Nah. I just don’t find naked photos all that great without consent. I have enough sent to me from willing partners that I don’t feel the need to look at yours.”

That’s…really decent. Like, a really human and empathetic thing to say. I have to fight back tears. This place is making me soft.

I sniff and say, “You’re not missing much. I’m just a scrawny Mounty.”

He laughs, but it’s not as cruel as it usually sounds.
Bree, J. Hannaford Prep: The Complete Series. Kindle Locations (882-931). Kindle Edition.

There’s so much more and Joey accelerates his plans only to be foiled by Lips. The only time it seems Lips gets to enjoy school is during the breaks when all the others leave. She of course stays and gets even more ahead on her studies.

There’s so much and at every turn Lips is battling something. I really love her persistence even when she has to call in the help of her friend Jackal in order to not be kicked out.

I swear I was turning the pages just to see what Lips would have to survive next, there are also some surprises as we learn more about her as the Wolf. The Beaumont family also has some interesting secrets as does Harley. I wonder if Blaine does as well. I know this is to become a reverse harem but only one of these guys has kissed her and they absolutely aren’t romancing her.

I really hope some of these folks get their comeuppance as this series continues. 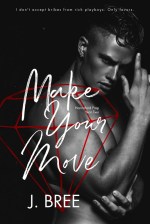