He runs in high society circles…
and he’s running circles around her heart.

In retrospect, it was all Gran’s fault.

Logan Montgomery has found his niche as an assistant district attorney. But Gran just revealed some worrying intel—dear old dad and his political cronies are about to maneuver him into running for mayor.

But Gran has a plan. A pre-emptive strike involving a pretty blonde caterer with supple curves—and a family history literally dripping with scandal. There’s just one flaw in his grandmother’s scheme: Logan’s not a player. And there’s delicious spark of attraction that makes him want to try for something special with Catherine Luck.

It’s a mystery to Catherine why Logan, who sits at the very top of the social ladder, would even look twice at someone like her. Maybe he has a thing for disgraced, overworked caterers. But his gentle concern, delivered in that velvety chocolate voice, can’t be real and Cat knows better than to mix business with pleasure.

Raw desire and genuine affection unexpectedly tip them into forbidden territory—love. Until Catherine gets a stark reminder that the Montgomerys never do anything without an ulterior motive.

I love grandmothers and Emma Montgomery is at the top of my list. She’s more than a little feisty with a wicked sense of humor. She’s plotted something devious to help her grandson Logan not only escape the plans his father has for him but also with a bit of luck have him fall in love.

Catherine is overseeing this major party for Emma, it’s a huge stepping stone for her catering business. She never expected the grandson of the hostess to be interested in her. Let alone have her own libido go off the charts.

She edged past the few remaining guests and slipped into the wide entryway that led to the coatroom in the foyer. Yellow and white satin wrapped around the circular staircase in the corner and draped like border paper high on the walls. More than once, she cringed as her sneakered feet squeaked against the freshly waxed marble floor. She entered the closet that was larger than the room she’d shared with her sister growing up and hit the light switch on the wall.

Despite the ominous clouds, the day had started off with potential and the closet was empty of jackets and coats. Catherine’s rain slicker, brought more out of foresight than need, stood out in the empty room.

Catherine turned at the sound of the deep, compelling voice in time to see Logan glance inside the walk-in closet. “Gran!” he called once more. “Is that you?”

“Not unless this party has aged me more than I thought,” Catherine said from the back recesses of the room.

He continued his path straight toward her. “Not a chance.” His gaze settled on her face, intense and focused. “Beauty and a smart mouth— you’re a lethal combination.”

She chose to detour around that remark. “I thought you already left.” She curled her hand around the soft plastic of her coat as if a solid grip would keep her safe from her rioting hormones and a sexy man.

“Keeping tabs on me?” he asked with a cocky grin.

“Guest awareness is part of my job.”

“Seems to me hiding behind your job is part of your job.”

“What’s that supposed to mean?” she asked, although she already knew. Logan had obviously seen through her feigned disinterest.

He walked up beside her. His masculine scent tantalized and seduced. A swirling ribbon of desire unfurled in her belly and reached straight to her core.

“I meant every time I try to get close, you scurry behind the job description. Do I scare you, Cat?” His voice lowered a dangerous, seductive octave.

His gaze never wavered. Warm eyes she could drown in locked and held with hers. Did he scare her? More than he could imagine.

“Because that’s the last thing I want.”

“Then what do you want, Mr. Montgomery?”

He laughed deep in his throat. “Semantics won’t keep me at a distance. It’s Logan.”

She licked her dry lips. His gaze followed the movement. “Logan,” she murmured more to appease him than to become more intimate.
“Nice. Now, as I was saying… I want to erase that cynicism from those beautiful green eyes. I want to make your dreams come true.”

His words struck Catherine in her heart. Unfortunately, she still didn’t believe he saw her as more than an interesting diversion from the more cultured, more beautifully dressed women at the party. Women who would trip over themselves for a chance at landing one of the state’s most eligible bachelors.

He had the audacity to grin. “That, too.”

She wanted to give in to that handsome face and easy smile, which meant she had to get out of here, to her empty apartment where safety and reality would reassert themselves.

“Logan,” she said, not wanting to give him further reason to believe he affected her. “I think…”

A loud thud cut her off as the closet door slammed shut behind them. She jumped at the unexpected sound.

“Hold that thought.” He touched her lips with one finger. Heat traveled between her mouth and his skin.

A shiver took hold. Desire? Fear? Probably both. Though she liked to flirt, she’d never reacted to a man with such carnal, sensual awareness before.

Before she could think further, he strode to the door and jiggled the door handle. The muted sound of metal hitting the marble floor sounded from outside. He muttered a curse.

“Nothing as long as you aren’t claustrophobic.”

He held the doorknob aloft in his hand. “Looks like the old lady has her own agenda. Not that I mind.”

An uncomfortable feeling arose in the pit of her stomach. “What are you saying?” She eyed the doorknob he held onto and shook her head.

He banged on the door with his fist. “Open up, Gran.”

“What’s your hurry?” Emma called out. “The company’s good, and the way things look, you’ve got plenty of time. I’ve got to find someone in this house who understands hardware. I think I did serious damage.” The click of heels on the floor sounded as she walked away.

“She didn’t,” Catherine said, glaring at the door through narrowed eyes. She wasn’t claustrophobic, but she disliked the feeling of being trapped. Especially with this man.

“She did.” Logan shrugged. “Sorry. She tends to get carried away.”

“You wouldn’t be suggesting I set you up?” Disbelief and humor lit his gaze. “I’m interested, not desperate. I can get my woman without Gran’s help.”

“Your woman?” She swallowed a laugh. “That has a Neanderthal sound to it.”

He shrugged. “I kind of liked it.”

“You would. So, how about breaking down the door, Tarzan?”

“If I give it a shot, will you have that drink with me?”

“You wouldn’t stoop to using your grandmother but bribery is okay?”

She believed he had nothing to do with their current predicament. The eccentric older woman would definitely pull a stunt like this. The only question was why. Emma certainly couldn’t think Catherine was an acceptable choice for her grandson nor could she believe Logan incapable of getting his own dates.

She glanced at his handsome face and forced a casual shrug. “One drink,” she agreed.

Logan’s father wants him to run for mayor and he is most persistent about it. Logan, on the other hand, wants no part of politics. Although he didn’t want to involve Catherine his father makes an awkward move and they all get caught up in it.

Plenty of fun, laughter, a sniffle or two and sizzle in this book. 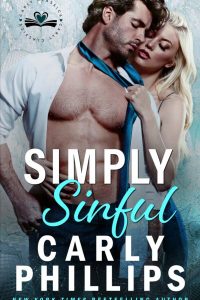