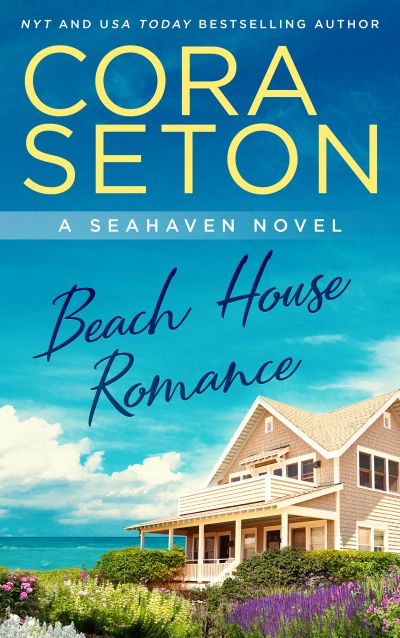 Emma Miller’s fiancé left her days before her meal delivery business went bust. Now she’s broke, homeless and starting out all over again, weighed down with debt that isn’t even hers. So when she learns she and her estranged sister, Ashley, have received an unexpected inheritance, she’s thrilled. Now they can both move to Seahaven, California, and run Brightview, her grandmother’s rambling beachside bed-and-breakfast. She’ll do the cooking. Ashley can tend the Cliff Garden, the attached acre of winding paths and flowerbeds that has been in their family for generations. With her money and family woes solved, who knows—maybe someday Emma will find love again.

Noah Hudson’s life couldn’t be better. He’s sold his successful business and can finally right the wrong he did years ago to his older brother’s career. Andrew deserves his turn in the limelight, so Noah just bought one of the last undeveloped oceanfront lots in Seahaven. He’ll give Andrew an unlimited budget to design and build a luxury vacation home that will land on the cover of every architectural magazine. While he’s waiting for his new digs, Noah has found a handy living situation in the bed-and-breakfast next door. While Andrew pursues his dream, he can spend his days on his own passions: extreme sports photography.

Emma is furious when she finds out Ashley sold their grandmother’s garden to the newly minted millionaire renting one of her guest rooms—a very handsome millionaire who seems to have nothing better to do but surf, snap a few photos and play havoc with her heart.

Noah just realized what he left off his to-do list: find the woman of his dreams. Turns out she’s his current landlady and about to be his next-door neighbor—if she doesn’t kill him for destroying her grandmother’s legacy first.

Can Emma and Noah find a way to heal the past without ruining their future together?

Emma Miller has hit bottom but is working her way up again. Her business closed, her belongings sold to pay bills, she’s working two jobs to save enough for a new place. Then another large envelope arrives, one she really hoped didn’t contain more debts to be paid.

Instead the envelope holds an inheritance, the bed and breakfast and gardens her grandmother owned had been held in trust for her and her sister Ashley. Although she was confused as to why it wasn’t revealed at the time of her grandmother’s death. She found herself wondering if her grandmother knew about her father’s gambling habit and overjoyed to now have not only a place to live but also a thriving business to run. She meets her neighbors, also women who have inherited their properties and businesses, Ava and Penelope. They quickly become friends meeting regularly.

Noah Hudson is preparing to leave the office when Mark Maxwell, his best friend and partner in Maxwell Tech comes into his office. Mark has big news, the moment they’ve been waiting for, an offer on their business to big to ignore. Not that they wanted to, Noah agreed to work with Mark until this moment, then he was going to buy beachfront property and let Andrew, his architect brother, build a showplace home. He knew exactly where he wanted the property, Seahaven beach on Cliffside Street.

When a property came up that Noah wanted he didn’t hesitate and then made a reservation for six months at Brightview the bed and breakfast near his new property. When he made the reservation he didn’t have a dog, now he did as a favor to his neighbor who needed care where he couldn’t have his pet. I really loved the interaction when Emma greets her new guest and his surprise pet.

“Hi.” The man smiled, and Emma’s breath caught. That grin was something, tugging at her insides in all the right places. She’d barely looked at a man since Jordan had dumped her, since the hurt was still too raw, but maybe she’d underestimated the rate of her healing. She was sure looking now.

“Hi.” She recovered herself and ushered him in. “I’m Emma Miller. Welcome to Brightview. Let me take your bags.”

Noah shook his head. “If you think I’m going to make a woman carry my bags to my room, you weren’t raised in the kind of house I was.”

She let herself smile at that. “Your room is right here, anyway.” She gestured to the first door on the right. “You really don’t mind it doesn’t have an ocean view?”

“I don’t mind at all.” He flashed that grin again. Comfortable in his skin, she thought. Oh, to be so confident. All her gumption had disappeared with Jordan and her business.

“You won’t get sick of it after a month or two?” Why on earth was she trying to run off a paying customer? Emma wasn’t sure, except something about the man was getting under her skin, a tug of interest deep inside her she hadn’t felt since… well, since she’d met Jordan.

This man wasn’t anything like Jordan, though. He was obviously a doer, judging by the way he prowled around the bedroom, easily lifting two large suitcases onto the bed. Jordan was a man who liked to talk about doing things, brag about doing them and make a whole lot of promises he had no intention of keeping. If only she’d realized that before she got engaged to the man and made him a partner in her business.

“Nope,” Noah said simply. “This is perfect.” He gestured to the large closet, the one good thing about the room aside from its cozy charm. “I have a lot of gear I need to stow, and this will get the job done. You mentioned there was room in a storage shed outside for my bike and surfboards?”

“I’ll keep my cameras in here. And…” His grin slipped a bit as he ran a hand through his hair. He ducked his head. Looked up again sheepishly. “There’s something else.”

Oh god, he’d brought a woman along, and now he was going to try to foist an extra guest on her—an extra guest who’d be in her house for six months. Should she bill him double? Refuse her? Emma told herself the panic rising inside her was purely to do with business and nothing at all to do with her disappointment that Noah was taken.

“Dog? You didn’t say anything about a dog.”

“I acquired him recently. Real recently. Like… yesterday. He’s a good dog, though. Come and see.”

A dog that was going to stay for six months? Emma’s thoughts spun. Would she have to warn other guests about him? Put it on the website? She’d designated Brightview as pet free…

She followed him outside to the Range Rover he’d parked in one of the spaces. Inside sat a very good dog.

Such a good dog.

“Winston?” she heard herself say to the fluffy golden retriever sitting upright in the back seat. “Oh, my goodness. You are obviously a sweetheart.”

The dog lifted its head at the praise. Rested its chin on the edge of the open window and cocked a doggy eyebrow at her.

“He can stay?” Relief was plain in Noah’s voice. He opened the door, and Winston hopped down. Obviously an older dog but still active, he immediately sat by Noah’s feet and waited to see what would happen next.

Emma crouched next to him and let him sniff her hand. When he licked it, she petted him, scratching behind his ears. When she found herself hugging the dog a minute later, she knew she was lost. She missed Buster, the retriever her family owned when she was little. He passed away the same year her mother did, which had broken her heart. A retriever made everything better, especially when it was a patient, older dog like Winston.

“He can stay—for now. If the other guests don’t mind,” she cautioned. Looking up, she saw that Noah’s earlier grin had softened into something like appreciation as he looked down at her. It sent a zing of interest through her body that Emma quickly quelled.

“Fair enough. I’m willing to pay extra.” Noah held out a hand. She took it, and he helped her to her feet.

Flustered by the sizzle of attraction that zipped through her at his touch, she boldly said, “I’m afraid I will have to charge you extra. I’ll have to notify the other guests of his presence, and it might cause some people to choose different accommodations.”

“How did you end up with him?”

Noah’s smile faded. “He belonged to a man in my building who’s moving into a retirement home in a few weeks. He’s not allowed to bring a dog as big as Winston. I told him I’d take him and bring him to visit now and then.”

Noah shrugged. “Who could say no to a face like this? Come on, Winston. See your new home.” Noah lugged another bag out of the Rover and shut the door.

The retriever obediently followed him inside. Emma trailed after them, marveling at the way the man seemed to take everything in stride. “Settle in, then come and have a snack,” she told Noah.
Seton, Cora. Beach House Romance (The Beach House Trilogy Book 1). Kindle Locations (592-636). One Acre Press. Kindle Edition.

There’s an almost instant attraction between Noah and Emma one that shows much promise. That is until she finds out where his property is. Emma is devastated to realize her sister had sold the gardens next to the bed and breakfast. They were far more than just gardens to the the town.

So much has to be overcome, the plans Andrew has for the house, her sister’s betrayal and then there is the love that has blossomed between her and Noah.

Laughter, Tears, Romance, Conflict and some Sizzle in this page turning read. 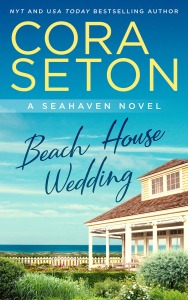 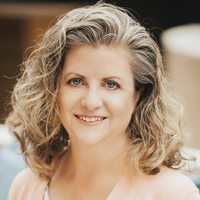