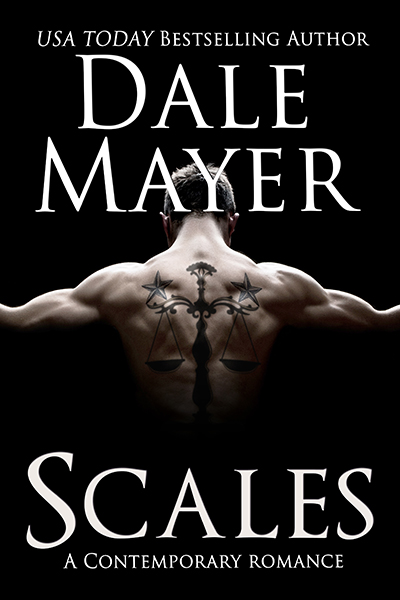 It’s a question of justice.
A debate between right and wrong.
But what happens when the lines blur, can justice prevail?

Paris believes she’s in the clear–thwarted justice. Weaver is powerless, waiting for justice.

Forced to deal with very deep and personal problems, Paris and Weaver, complete strangers, agree to a therapy assignment that seems radical and frightening.

As they navigate the boundaries between right and wrong, against shattered hearts, can Paris and Weaver balance the scales of justice to find what they’re looking for?

In the previous book ‘Scars’ we met Sean, Paris’ brother. Paris wasn’t accepted to that session, because Dr. Jenna Komak said she wasn’t ready yet. Now it’s her turn, she’s eager, a bit anxious and is trying not to attract attention.

Weaver doesn’t think he needs the seminar, so Jenna’s challenged him. Since he thinks he’s immune she wants him to write a paper on it and if at the end he still feels immune she’ll help him get it published. It’s one of the things on his bucket list, a challenge he’s determined to meet.

The addition of a question to their ‘homework’ brings back all of Paris’ fears as she wrote her answer. Realizing what she wrote and unable to share that she tears it off and rolls it up. When she drops it Weaver is about to pick it up when she grabs it and swallows it. An unusual response that perks his curiousity.

There assignment from Jenna is to center on their differing perspective of justice. Paris is skeptical and is ready to bolt after she finds he is writing a report to hopefully be published. She seeks out Jenna and after their talk she decides Weaver needs the help as much as she does.

The two of them have different issues as has been the case in the previous books as well. They begin getting to know each other, walking in the cool fall air to the ocean.

It was the last thing she wanted to do, but her feet had a mind of their own and fell into step beside him. The air was cool for a September day. The moist, slightly salty air revitalized her spirits. Normally the spring and fall here were warm and stunningly beautiful with bright blue skies. Today offered the beautiful part, but it wasn’t warm or blue. She stuffed her hands into her jacket pockets and let the world stroll by as she walked.

“We’ll head towards the ocean.”

“Are you cold?” he asked in concern. “The breeze has a bite to it.”

They walked in silence until the first glimpses of the sailboats popped into view. She broke into laughter. “They always look so bright and cheerful out there buffeted by the wind and waves.”

“I don’t know how cheerful they are today considering the beating they are taking.”

The breeze that brushed by them was a strong wind out in the bay, but the people in the sailboats looked to be having the time of their lives. Then she caught sight of the kite surfers. “What a sport,” she exclaimed.

“Not into dangerous sports?” she asked, feeling shivers sliding over her skin. “I’m not either, but men generally like that sort of thing.” Of course her brother didn’t, but in their house, growing up had been a dangerous sport. She smiled, loving the reminder of her brother, and the shivers stopped.

“Not my style.” He gave a harsh laugh and said, “I survived childhood. That was hard enough.”

Shocked, she stopped all of a sudden, then turned to look at him. “I was just thinking the same thing.”

With an understanding look, he moved closer to her. “Our daily life isn’t like these people.” He pointed out a particularly high-flying kite boarder. “He’s happy to chase after excitement and danger. For most of us who grew up in a violent household, we are looking for the opposite. We want peace and safety now.”

She couldn’t have said it better. The insight into his life, his childhood, made her realize he really had been through the wringer – like the rest of them at the seminar. Holding her breath, she stayed silent, hoping he’d share more. One foot rested on the cement barricade between them and the water, the look on his face distant but calm. As if he’d come to terms with something behind him.

There was a world of difference between his childhood and hers, she knew, but for the first time she realized there was also a lot in common.

“Maybe some of those people have been hurt so much they no longer care what happens to them?”

“That’s the other side of the coin, isn’t it?” He glanced at her. “Survival means different things to different people. Some say they survived, but inside they are dead and can’t stand living. Some people do crazy stunts in the hope to kill themselves off because they aren’t strong enough to do it themselves. Sounds horrible, but I’ve seen it.”

“And in some cases, they are so angry inside they turn around and inflict the same abuse on others,” Paris whispered, looking at the black mark his shoe scuffed into the cement barricade. Briefly letting her gaze follow the line of his foot up his leg, remembering how it felt when he had held her.

She didn’t see the same rage in his demeanor or actions she’d seen in other men. He’d never hit anyone for fun. Was she right to trust that assumption? She didn’t really know him. But she wanted to.

“Often those people feel that they have to get their own back. Or feel like if it happened to them, why should you be safe? I knew one male who figured it was his job to go around and attack women because then they wouldn’t be so trusting. They’d take more precautions because now they understood life could be dangerous.”

“Really? That’s a little twisted, isn’t it?” Startled, his words shook her out of her daze. She’d read about a lot of people and their odd reactions to stress and pain, but that was a new one on her.

“There are some very sad cases out there.”

“And here,” she muttered.

“Everyone is doing what they can,” she said quietly. “Even those still locked in that same horrible place they went to during the abuse. And they can’t move out of there because it’s either too painful or fear won’t let them move. Either way, it’s all they can do, too.” Quiet, Paris wondered at what she’d started. What she’d inadvertently shared.

“You’ve been there?” Weaver questioned.

“All my childhood and teen years. I should have run away. Should have gotten help. I couldn’t.” Hands jammed in her pockets, she tried to still the shakes rattling her calm.

“It’s easy to look back. Not so easy to avoid judging.”

“Except…” Glancing down at her, their eyes met, “we have to make allowances for the age we were back then. The conditioning we were put through.”

“And when we were older and still allowed the status quo to remain? Then what?” The bitterness in her voice was audible. She bit her lip “I stopped it – finally. I should have done it earlier.”

“And how old were you when you stopped it?”

It took a long time for her to answer, and then with a sigh, she said, “Fifteen.”

His shocked gasp made her look at him sharply, searching for the judgment she expected to see. And there was none. Still she felt she had to explain more, to justify herself. Her actions. “No, I wasn’t very old, but I was old enough. And if I’d done something about it earlier, then someone else wouldn’t have gotten so very badly hurt.”

“You were a child. Before and during. The conditioning you were put through didn’t give you the tools to handle resistance, to defend yourself or to stand up for someone else. We’re usually so broken by the time we get there it takes a major turning point in our lives to make us change. In your case, maybe for this other person.”

She gave him a hooded look. “More book learning?”

“No, life learning.” And this time, it was him that turned away.

Something to think about. She sagged onto the railing and studied his averted face. “Life’s a bitch, isn’t it?”

That surprised a laugh out of him. “Isn’t it though? Or maybe I should say, life used to be a bitch. Now it’s much better.”
Dale Mayer. Broken but& Mending: Books 1-3 (Kindle Locations 5229-5282). Valley Publishing. Kindle Edition.

Their conversation is just the tip of the iceberg Paris has to overcome. Her major fear is one connected to what she reveals to Weaver but doesn’t come to the fore until later.

I love the journey as painful as it is for both Paris and Weaver. Their connection develops slow and steady and I loved getting a glimpse of Sean and Robin.

These books were powerful, different and enlightening to struggles many people have. 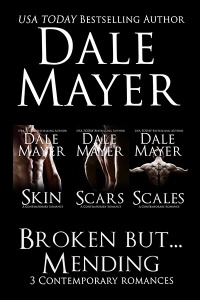 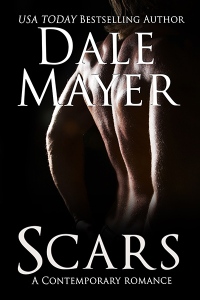