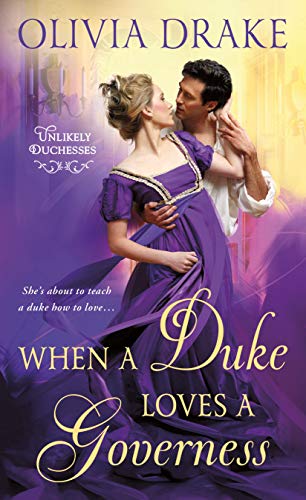 Tessa James has worked and planned tirelessly to open her own millinery shop. All she needs now is a loan from the lord who sired and abandoned her. The only problem is, she doesn’t even know his name. What’s a woman to do to find him but enter the aristocratic world by becoming a governess?

Guy Whitby, the new Duke of Carlin, has returned to London after years abroad to discover that his young daughter Sophy has become a wild-child known for scaring away every governess who’s crossed his doorstep. When Tessa James applies for the job, he hires her in desperation despite his misgivings that she’s too bold and beautiful–and that she might be fibbing about her qualifications.

Their blooming attraction leads them on a completely unexpected path to love that neither wants to deny. But when an old enemy threatens Guy’s family, their forbidden romance goes up in flames. Can they still learn to love and trust each other as forces try to tear them apart?

There is gossip aplenty in the millinery shop where Tessa James works. Today’s is about the new Duke of Carlin. Apparently his daughter is a terror and has chased away several nannies, the most recent left just this morning and had lasted only four days. As Tessa is listening to the conversation she gets an idea. She’s been trying to locate her father, the only clue she has is a gold pendant engraved with a coat of arms. Her mother gave her the pendant as she was dying and she never removes it. If she could get the position of governess she would make more money and put her goal of owning her own shop closer to reality. She would also have a better chance of finding out who the coat of arms belongs to.

Her boss Madame Blanchet startles her out of her musings and she pricks her finger. Unknowingly getting a tiny spot of blood on the brim. When Madame spots it, she immediately says Tessa will forfeit her wages to pay for it. For Tessa that was the last straw and she quits.

We meet her friend Orrin who works for the newspaper as a typesetter, as he catches her packing up. She has a plan and she hopes everything falls into place. Being the governess to Lady Sophy is her goal.

Guy Whitby never expected to become the Duke of Carlin, his father was not the heir, his uncle was. There were a series of unfortunate occurrences that led to him holding this position. His Uncle Sebastian and his son Charles died when their yacht capsized in the Isle of Wight. Following that, his father came down with a deadly stomach ailment and now Guy’s grandfather died of a heart attack, leaving him all the responsibilities of the Dukedom. His Aunt Delia, Lady Victor her son Edgar and her companion Avis Knightly also reside in his home. Providing a stream of visitors he really doesn’t care about. He didn’t have the heart to tell her he has no intention of marrying again.

Guy’s daughter Sophy is in desperate need of discipline and he was having a great deal of difficulty administering it. The guilt of having left her for so long with her grandparents a burden he feels he needs to compensate for. When Tessa arrives he is desperate for someone to take her in hand. He doesn’t like that she is young but finally agrees to a trial week.

From the start Lady Sophy puts Tessa through her paces, with tantrums and trying behavior at bath time as well as throwing bedclothes to the floor at bedtime. An exhausted Tessa doesn’t get to find paper to forge a letter of reference falling asleep instead. She almost loses her position but manages to convince the duke she’s the best choice as she can give Sophy the transition she needs.

The first hint of attraction between Tessa and Guy comes after Sophy throws a rock through a conservatory window, that act of destruction also comes with a revelation into why Sophy appears to hate her father.

Some flirting as Tessa is caught eyeing him and he realizes just how beautiful she is. Now things are going to get interesting. Tessa encourages the duke to explain the origins of the plants and birds. Combining a sort of biology and geography lesson. We are introduced to Jiggs here as well, he’s the duke’s valet as well as a jack of all trades.

There’s just so much going on even in the background. We have some interesting characters there. Lady Victor is petrified something will happen to her son Edgar now that he’s the Duke’s heir. Her companion Avis Knightly becomes a friend to Tessa. It’s from Avis that Tessa learns a more of what Lady Victor calls the Carlin Curse and also that there are books on English Heraldry.

This is a cleverly written tale, with many twists and turns revolving around Guy and Tessa. There’s mystery, laughter, tears and so many surprises. I couldn’t put this book down.

Shortly after graduating from Michigan State University with a degree in journalism, Olivia Drake sold her first novel two weeks after sending it to a publisher. She now lives in Texas in a cozy cottage with a feisty cat, a loving husband, and two wonderful daughters who still come back whenever they want a home-cooked meal.

Many of you already know Olivia as Barbara Dawson Smith, author of 24 historical romance novels. She is a New York Times bestseller and winner of numerous honors, including the Golden Heart Award and the coveted Rita Award for excellence in the historical romance genre.