When Mark “Smoke” Chamberlin ventures into the Nigerian jungle with his team of government assassins, his mission is clear: get in, kill the target, and make it out alive. With his extensive military experience, Smoke has no problem heading into dangerous territory. When it comes to love, though, he’s always been a little wary. But then he meets the beautiful, intrepid Molly Smith.

Schoolteacher Molly has been trying to outrun a lifetime of bad luck, and now she finds herself kidnapped along with a hundred schoolgirls in the jungle. But when Smoke finds them, Molly thinks her luck might be turning around—until she returns to the US to find her beloved grandparents murdered.

Devastated by their deaths and mystified by the turn of events, Molly turns to Smoke for comfort. But as Molly and Smoke grow closer, a different threat emerges…one that will put their relationship to the test and their lives in grave danger.

Mark “Smoke” Chamberlin and his team finally found the camp of the Boko Haram group that kidnapped seventy two young girls from their school. The leader needs to be taken out and the girls rescued, hopefully they’d find the American Environmental Engineer with these girls. Molly Smith was visiting the school when the attack happened. As they worked out their plan they scanned the area but don’t see Molly. They are pretty sure she’d been killed and dumped in the jungle since she wasn’t a child, they’d really like to confirm that one way or another. No one was looking for her, her grandparents died in a fire not long ago and her company pulled everyone out of Nigeria after the attack. Waiting was difficult for the Silverstone crew, but they need to wait for the Nigerian Security Forces. There were too many terrorists for them to handle on top of their mission to kill Abubakar Shekau.

Molly had managed to cause trouble early in their captivity and was now in a hole dug into the jungle floor. She knew her time was running out, the water that had been at the bottom of the hole was dried up and further digging didn’t find more. She wouldn’t be able to survive without water. In a twist of fate it started to rain that evening, and Molly was grateful for it. She had no idea what was going to happen next.

Smoke was more than a little surprised to fall into a hole, and more so to discover Molly there. He has to leave her to help his team, but he promises to return and leaves his pack with her.

“Yeah. I need to go back to her,” Smoke said. He turned and headed behind one of the large tents, straight toward the hole where she was being held. His teammates followed close behind. Smoke knew he should be paying attention to the jungle around him, as it was more than likely some of the terrorists had fled into the dense foliage, but his eyes were glued to the ground.

The hole wasn’t exactly hidden. Her captors hadn’t tried to camouflage it.

“Holy shit, are you fucking kidding me?” Bull asked as they neared Molly’s prison.

“Please tell me she’s not in there,” Eagle added.

Smoke didn’t blame his friends for their reactions. They’d seen many of the horrible things one human could do to another during their stint in the Army and as Silverstone. They definitely hated to see anyone, especially a woman, put into a hole and left to rot.

Lifting the strap of his rifle over his head and shoulders, Smoke got down on his hands and knees and crawled the remaining few feet to the hole. He didn’t want to risk any debris falling in on Molly.

He peered over the edge—and blinked in surprise. Molly had obviously been through his pack, as she was now wearing one of his extra T-shirts. She’d tied it in a knot at her waist, and he could also see the ends of the rope he’d told her to use as a belt dangling down her legs. She was sitting on his pack, and her head was resting on the dirt wall behind her. Her eyes were closed . . . and she looked as if she was sound asleep.

She jerked as if he’d bellowed her name right into her ear, losing her balance and falling off his pack and into the mud at the bottom of the hole.

Smoke frowned. She was asking him if he was okay? Admiration bloomed in his chest. “I’m good. You want to get out of there?”

“Yes!” she practically shouted as she stood up.

“There should be a makeshift ladder somewhere in camp. That’s how I got in here, and how the assholes who kidnapped me got me out whenever they wanted to make a point.”

Smoke didn’t like the sound of that, but he let it go for now. “No need for a ladder,” he told her. “Can you scoot over until your back is against the wall?”

She looked confused but immediately did as he asked. Smoke turned to look at his teammates. “I’m going down. I’ll give her a boost up, then I’ll need a hand.”

“Of course,” Gramps said, shrugging off his own pack and getting ready to assist.

But Smoke was already moving. He sat on the edge of the hole, then hopped back down into the pit.

“I don’t know whether to be impressed or pissed that you make that look so easy,” Molly complained.

Smoke grinned, then ran his gaze over her, assessing. She looked rough. There was no denying that. But then again, so did he. He hadn’t shaved in a month, and other than using a washcloth to clean himself, he hadn’t had a real bath in that same amount of time. He and his team had been scouring the jungle for any signs of Boko Haram and the kidnapped girls. While they’d had the option to stay in a few small villages, they’d decided to rough it instead, just in case they came across any Boko Haram sympathizers.

But he hadn’t been starved. Hadn’t literally slept in the dirt. He’d washed his clothes in a couple of the small streams they’d come across, and he’d had plenty of water, thanks to the filters and purification tablets he and the others carried.

Molly hadn’t had any of that. He had no idea how long she’d been kept in this hole, though it was obvious it had been more than a day or two. But amazingly, she stood in front of him right now, upright and unwavering.

If Smoke was being honest with himself, he was a little bit intimidated by her strength.

“You ready to get out of here?”

“Yes.” Her answer was short, but the emotion behind that one word was clear.

“Right. My friends will help you at the top, all you have to do is put your foot in my hands, and I’ll lift you. Easy peasy. You ready?”

Molly looked up and saw Bull, Eagle, and Gramps standing at the top, waiting to help her. Then she looked back at him.
“Am I allowed to ask what your name is?” she asked quietly.

“Shit. I haven’t even introduced myself to you. Wow, is that rude. I’m Mark Chamberlin. But everyone calls me Smoke.” He held out his hand.

“I’m Molly,” she said politely as she shook his hand. “It’s very nice to meet you.”

Smoke held on to her hand for a beat, then squeezed it gently before letting go. He interlaced his fingers together and leaned over. “Put your foot here,” he told her, gesturing to his hands with his head.

She put her hand on his shoulder to steady herself, then placed her tiny bare foot into his hands trustingly. Moving slowly so as to not startle her, Smoke stood as Molly walked her hands up the side of the hole, and the second she was within reach, his teammates took hold of her arms and pulled her up and out of her prison without fanfare.

Once she was out, Smoke picked up his pack and shrugged it on. Then he held up a hand, and Gramps grabbed hold. Within seconds, he, too, was standing beside the hole.

“Well, that was almost a little anticlimactic,” Molly said, running a hand uneasily over her hair.

“Trust us, anticlimactic is good,” Gramps said. “We prefer things to be unexciting, if possible. I’m Gramps.”

Molly looked up at him. “I think you’re taller than that hole I was in,” she noted as she shook his hand.

“I’m Eagle,” Eagle said, as he extended his hand.

Bull then introduced himself, and Molly smiled at them all. “And I’m Molly, but I’m guessing you all knew that.”

Everyone nodded. “We’re very glad to see you alive and well,” Eagle told her.

She shrugged. “I just meant that I’m a little worse for wear.”

Smoke knew he should’ve relaxed at her explanation, but he couldn’t seem to. Why he felt so bothered by her discomfort about the way she looked, he had no idea.
Stoker, Susan. Trusting Molly (Silverstone). Kindle Locations (429-487). Montlake. Kindle Edition.

The original plan was for Molly to go with the other girls, but that changes as soon as they see how the girls treat her. Blaming her for their kidnapping. The fact Molly considers herself bad luck is something the guys especially Smoke want to change her mind about.

They take their time getting back to their truck and on the way they tell Molly about her grandparents. They also learn about Molly’s ex who was her reason for taking the overseas assignment.

I love the Silverstone team. The relationship that develops with Smoke and Molly is a simmer to sizzle one as they work through all the issues to keep Molly safe.

I couldn’t put this book down! 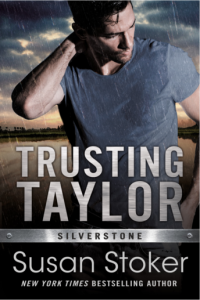 Susan Stoker is a New York Times, USA Today, and Wall Street Journal bestselling author. Her series include Badge of Honor: Texas Heroes, SEAL of Protection, Delta Force Heroes, and Mountain Mercenaries. Married to a retired Army non-commissioned officer, Stoker has lived all over the country—from Missouri and California to Colorado and Texas—and currently lives under the big skies of Tennessee. A true believer in happily ever after, Stoker enjoys writing novels in which romance turns to love. To learn more about the author and her work, visit her website, or find her on Facebook. Links below.