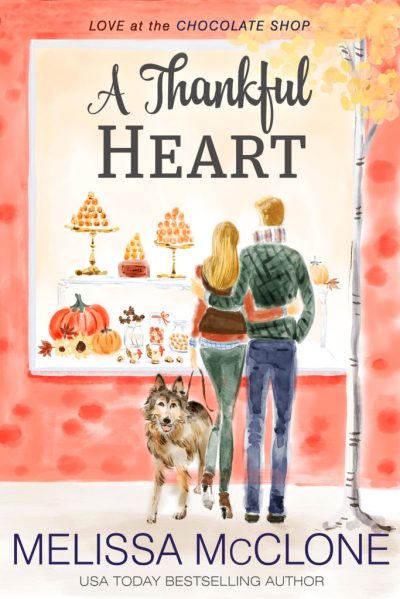 Chocolate is better than men, and so are dogs. At least, that’s what Dakota Parker tells herself as she mends her broken heart and finds forever homes for rescue animals. So far, so good. She can indulge her love of chocolate where she works while her foster dogs provide her with the unconditional love she craves. What more does she need?

Seattle architect Bryce Grayson is counting the days until he can return home to the big city with his father in tow. That is if he can convince his dad to leave Montana. Bryce’s escape plan, however, goes astray when he meets Dakota. Her sweet kisses put the chocolate she sells to shame. Maybe he should be the one to move to Marietta, but could he be happy living in such a small town?

He has until Thanksgiving to decide.

I bought this as The Parker Family Trilogy and I’m reviewing them individually.

Dakota Parker works at at Copper Mountain Chocolates and volunteers at Whiskers and Paw Pals animal rescue in Marietta, Montana. She’s fostering two dogs and a rat at the moment and has also written a proposal to get all the animals adopted by Christmas. The rescue director Lori Donavan thinks it’s too simplistic and the timeline unrealistic. She put a lot into that proposal so Lori’s words hurt. An interesting twist to her day is when a stranger comes in refuses the sample and claims he doesn’t like chocolate, yet purchases some of the top sellers. The man was gorgeous but paid cash so she couldn’t learn his name from a credit card.

Bryce Greyson has come to town to help his father and stay until after Thanksgiving. He’s hoping over that time to convince his father to move to Seattle. He doesn’t like being so far away from his father and now with those two broken legs it proves his point his dad shouldn’t be alone.

Dakota was stopping by to see how Walt was doing and bring him some chocolates. That’s when she first meets Bryce recognizing him from his stop at the chocolate shop. It’s while they were all talking that Dakota gets an emergency call from the shelter. A pipe broke and they need to get the animals out. Walt wants to go but Bryce and Dakota both squash that idea and instead Bryce would be going to see what he could do.

Amid the barks and meows, a whimpering sounded.

Oh, no. Someone was unhappy. Most likely afraid due to their new surroundings. She needed to find out who ASAP.

Clipboard in hand, Dakota followed the sound. The whimpers grew louder. She was getting closer, but she noticed none of the dogs near her looked happy.

Molly, a poodle mix, faced the back of the crate as if in a time out, but she wasn’t making a sound. She was a lap dog who loved being petted and brushed. The dog hadn’t gotten along with her owner’s new boyfriend, so Molly had been surrendered. A generous donation had been made for the dog’s care, but that hadn’t helped the dog understand why she’d been left.

“You’ll be inside soon. I promise.”

Molly didn’t move. The only time she perked up was when someone held her.

If Dakota had been faced with the same decision, she would have dumped the guy and kept Molly. Dogs were the best judge of character. None of her foster dogs had liked Craig or her other ex-boyfriends, either. The men had blamed the animals and the rescue for taking too much of her time. She would have to remember to trust the animals’ judgment the next time she dated.

That didn’t mean all was well. She needed to find the dog.

The next crate contained Fred, who’d come to them from a high-kill shelter in Southern California. The Dachshund mix trembled, even though he wore a sweater that a volunteer had knitted for him. Fred was another Lonely Heart animal. He’d lived at the rescue for over a year.

“You look dapper, Fred, but it’s colder than you’re used to. You won’t be outside much longer.”

She spotted the crate—Maverick, a Border collie whose owner, a retired rancher from Livingston, had entered an assisted living center two weeks ago. Pets weren’t allowed in the facility. With no other family around, Maverick had no place to go, so he’d ended up at Whiskers and Paw Pals.

She kneeled in front of the crate’s door.

Maverick’s head hung low. Being in the rescue was hard enough after having a huge ranch to roam. She had no doubt he hated being locked in this hard-sided crate.

Dakota stuck her fingers through the door’s grate. “I can’t let you out, honey. This is the safest place for you right now.” She touched his fur with her fingertips. “You’re going to spend tonight somewhere else. Maybe tomorrow, too, but you’ll be back before you know it. If not, I’ll come visit. I promise.”

Maverick rubbed his muzzle against her fingers.

Her heart squeezed. The dog was seven, well behaved, and loved kids and cats. Dakota was surprised he was still at the rescue, but adoptions had been slow lately, which was why they were so full.

“The dog likes you,” Bryce said. She recognized his voice this time.

“This is Maverick.” She kept her fingers between the grating. “He likes everyone.”

Too bad she couldn’t say the same about Bryce. Okay, that wasn’t nice. The man had brought her pizza.

Dakota focused her attention on Maverick, who pressed against her fingers. He wanted to be on her lap, but she couldn’t let him out. Instead, she petted him as best she could.

She glanced over her shoulder. Her gaze stared right at his pant zipper. She gulped. Not the view she expected or wanted.

Maverick pressed his wet nose against her fingers.

She leaned closer to the crate and whispered, “Be right back.”

Dakota stood. “Thanks, but one slice was enough.”

Bryce gave the dog a cursory glance—one that matched his eye roll when Walt had talked about volunteering at the rescue.

Whether he liked animals or not was unimportant. He was here. Sure, his father had told him to come, but Bryce had construction knowledge. Maybe he knew the status of the building.

“How bad is the damage inside?” She asked the question that had been weighing on her mind and her heart.

He rubbed his chin. “A major pipe broke and affected both floors. We don’t know the extent of the water damage yet, but if this hadn’t been discovered until the morning, it would have been much worse.”

“A volunteer had stopped by to give animals their medications and clean.” Dakota glanced at the building. “Seems like a lot of activity inside.”

He nodded. “The water and electricity have been shut off, and plumbers have been draining the pipes while furniture and other things are being moved out of the affected rooms. The insurance agent stopped by, too.”

“One of the blessings of living in a small town.”

“The rescue’s director, Lori, said mold can affect an animal’s health so a professional water restoration company has been called in. They’ll work through the night. We’ll have a better idea of the damage tomorrow.”

“Will the animals be able to return then?”

The one word brought Dakota’s worst fears to life. A tennis-ball-sized lump of panic lodged in her throat. She swallowed. That didn’t help. “They’ll be able to return, right?”

She crossed her arms over her chest, as if that could protect her, the animals, and the building. “You don’t sound hopeful.”

“It’s hard to say what will happen. The inside is a real mess.” His words increased her worry. “Tomorrow, we meet with the claims adjustor.” “We?” “Since my father can’t be here, I’ve offered to help in his place. Lori asked me to attend the meeting and walk-thru. Though she seems capable enough to handle things herself.”

“Lori is. I call her a pet-saving superhero.” The director spoke what was on her mind, but she would do anything to help any animal, whether they were part of her group or not. “The rescue is her life, but she knows to ask for help when she needs it.”

“Happy to do whatever I can.”

Was he? Dakota wanted to believe him, but trusting was hard for her. Especially someone she had just met.

Maverick whimpered, and she stuck her fingers through the grate again. He quieted.

People with headlamps walked into the shelter.

That made her wonder…hope… “If the electricity’s off, maybe the inside isn’t as bad as it appears tonight. Things could look better in the daylight.”

“That’s one way to look at the situation.” His tone suggested he thought it was the wrong way.

She raised her chin. “What can I say? I’m an optimist.”

“I consider myself a realist because I know better than to get my hopes up.”
McClone, Melissa. The Parker Family Trilogy : Love at the Chocolate Shop. Kindle Locations (618-671). Tule Publishing. Kindle Edition.

Of course Bryce sticks his foot in his mouth yet again. It’s a habit of his.

In spite of his father’s protests, Bryce still insists Walt would be better off in Seattle.

He gets talked into helping Dakota in redoing her proposal to meet the requirements of a challenge set by a very generous donor and even helps with the set up of the adoption events.

These two have chemistry but there’s a lot to overcome for a happily ever after.