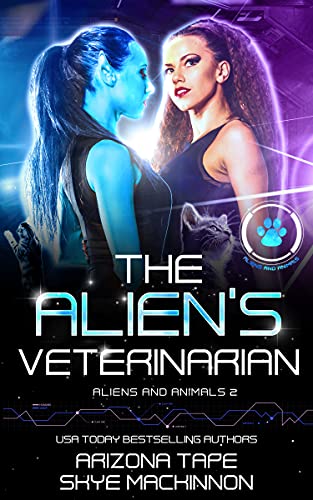 No space adventure is complete without a cat

Abby prefers animals to people, which comes in handy since she’s a vet working long hours at a cat rescue. She can’t say no to a critter in need, so when she’s offered a quick and well-paid job to look after a pregnant jaguar, she accepts it. Problem is, she didn’t read the small print…

Sahra has travelled to Earth to find a healer who can help with the animals back on Kyven. But how do you persuade a human to leave their planet without revealing that you’re an alien? It’s time to twist the truth a little and abduct an unsuspecting vet.

Throughout the journey, their ability to work together is tested. When a storm and a dangerous beast threatens their lives, can they make it out together?

NOTE:
An out-of-this-world f/f romance with a cat-loving human woman and a determined alien female willing to do anything to find her mate. Part of the Aliens and Animals series.

In the Alien’s Zookeeper we met Tilly and her animals as they were taken from earth. The mess up was on the part of Bavalla who is now Tilly’s mate. Now they have a pregnant leopard and she’s in trouble. They send Sahra to earth with directions to get medications and a Veterinarian. She kinda messes this up but at least not as badly as the previous book went.

Abby is surprised when Sahra requests her to come to her home to treat the cat in trouble and even more so when she sees the horse and buggy Sahra is driving instead of a car.

I stopped in my tracks when I saw the horse-drawn cart parked outside the practice. It didn’t look like one of the romantic wedding carriages that sometimes drove through the centre of town. This was something you would have found at a farm a hundred years ago. I’d cared for horses before, but most farmers and riders used specialist vets, so it was unusual for a horse to stand in front of my house.

I looked around for the owner, but the street was empty. Maybe they weren’t here to see me after all.

Sahra confidently headed to the cart and climbed on the driver’s seat. It was hers. Bloody hell. This woman was becoming more and more intriguing by the minute.

She held out a hand to help me up. When our fingers touched, a strange zing of electricity shot up my arm. I rubbed my hand, but the tingly feeling was gone.

The bench was narrow and our thighs touched when I took a seat. Again, the tiniest of electric shocks hit me.

I put my vet’s bag in the back. The cart was strangely clean; not a single bit of hay or mud anywhere.

“Do you have medicine for cats?” Sahra asked, pointing at my bag.

“Yes, it’s got all the essentials. If I need anything else, I can write a prescription later.”

The horse moved without her having to say anything. Its hooves clacked on the tarmac, the sound echoing back from the narrow terrace houses.

“This is an unusual choice of vehicle,” I said after a moment’s silence.

“I was told this is what you use,” she replied in her strong accent that I still couldn’t place.

Was she making a joke? Or had she really thought that we used horse-drawn carts in 21st century England? She had to be from somewhere very remote without access to television, the internet or even a newspaper. No, this had to be joke.

“Where are we going?” I asked to skip the awkward moment. “Do you live far?”

For some reason, that made her chuckle.

“We need to stop on the way,” she said instead of giving an answer. “My sister’s mate gave me a list.”

She handed me a scrap of paper. On top was the address of the veterinary pharmacy I got most of my own supplies from. Underneath someone had scrawled about twenty different drugs and salves. One I recognised as a powder I regularly prescribed for treating rodents’ skin infections.

I found it strange how she described her, but maybe that was because of her lack of vocabulary.

“She looks after animals. A zookeep.”

“Zookeeper,” I corrected automatically, regretting it when her expression fell.

“But I totally understood zookeep, don’t worry. So she asked you to get all these things?”

“Vet,” I said quickly. “Everyone calls us vets. Veterinarian takes forever to say.”

She gave me a grateful smile. “Vet. I like that. Do you know where we have to go?”

“Yes. We’re actually really close. Take a right turn over there and then a left at the junction. And – wait, those lights are turning red!”

Twenty minutes later, we had several bags full of bottles, pills, powders and creams in the back of the cart. I’d helped Sahra with persuading the pharmacist that yes, she really needed all those things. I wasn’t sure why that zookeeper didn’t get all those things herself, but it was actually quite fun to go shopping.

Cars kept passing us, some of them hitting their horns, but Sahra ignored them all. Her horse was surprisingly fast, so we weren’t as much of a traffic jam creator as I’d feared.

She pulled another piece of paper from her bag and handed it to me.

“My sister’s mate wrote words for you. She said you have to write your name on it.”

Sahra only shrugged and looked straight ahead.

I scanned the handwritten document. It looked like it had been written in a hurry. Some of the words were smudged and completely illegible. I had to squint to make out what this letter was supposed to say.

By signing this contract, you agree to come …. to … and to care for the feline and her offspring until they’re well enough to be without veterinary care. You will be offered travel, … and generous remuneration. We will of course pay for any drugs prescribed. [insert amount here]

You will not divulge anything you see or hear during your stay on … once you have returned to your home. In return, we promise complete confidentiality.

This is a binding agreement under … law.

No matter how hard I tried, I couldn’t read some of the smudged words. Still, the rest was enough to make sense.

“Isn’t this a bit over the top?” I asked. “I’d never gossip about a patient.”

Sahra smiled. For a moment, a trick of the light made her hair shimmer blue before it returned to its deep chestnut colour.

“I’m sorry. My sister’s mate says it’s important.” She shrugged. “She says you can write your own money.”

She nodded. “Yes. Fee. That was the word. Sorry, I’m still learning.”

“Oh, you’re polydactyl!” I exclaimed when I spotted her extra fingers. “That’s rare for humans, but I see cats with it all the time.”

Sahra looked embarrassed and curled her hands into fists to hide the sixth digits. “

Sorry,” I said, feeling guilty for calling her out on it like that. “My social skills aren’t always the best. I spend most of my day with animals. They’re much easier to be around than people.”

The journey back to Kyven, is not without problems. Abby is more than a little curious, she just wants to make arrangements for her practice to be covered in her absence.

There’s more than a little tension between Sahra and Abby, and I really thought they’d figure it out sooner than they did.

A bit of drama, some sniffles, and giggles too. I can’t wait for Tamsia’s story.

5 Contented Purrs for Arizona and Skye!

A creator at heart, Ari has always been in love with the idea of turning nothing into something. She wants to conquer the book world with stories that focus on inclusivity and diversity, writing what she likes to read. Whether it’s adventure or romance, dragons and vampires, or princesses and students, there’s something for everyone.

Born in China, raised in Belgium, and currently living in the United Kingdom with her girlfriend, Ari is a citizen of the world and loves discovering new cultures. Luckily, her crazy imagination lets her discover places she’s never been to, meet people that don’t exist, and talk to readers from all over the world.