Sometimes, it has to end before it begins.

In the course of a year, I have had my heart broken, reforged, only to be shattered again. The tears won’t come. Not anymore. No more looking back. No more asking what if.

Coop wants me to let myself feel it. Jake wants to distract me. Archie wants to put the world at my feet. Ian wants me to not make choices until I’m ready. I’ve got family ready to catch me, but I refuse to fall.

No more holding my breath.

The future is now.

We have a chance to forge the path we want and I’m all in.

So why does it feel like I’m running away?

NOTE:
*Please note this is a reverse harem and the author suggests you always read the forward in her books. Contains some bullying elements, mature situations, and is recommended for 17+. This is the tenth in a series and the story will continue through future books.

First, if you haven’t read the rest of this series, STOP, go back and read them, you won’t be disappointed.

At the end of the last book, I think I can safely say all of us were both shocked and relieved at the demise of Frankie’s mother Maddie. That Edward, who truly loved her, chose Archie and Frankie over her, was huge. Now we deal with the aftermath, the funeral lowkey and dignified and luncheon following held a few interesting confrontations. One with Frankie’s grandparents and another with Dominic Walsh.

Once back at school, Frankie hasn’t been able to attend classes, her attention span just isn’t where it needs to be. She has options she just hasn’t taken the steps to take advantage of them. However, she does realize it’s her best option at this time.

Rachel becomes more prominent in their lives throughout this book. Her presence is something Frankie needs and truly she is the best friend ever!

The guys of course are the most patient, they know they can’t help with the grieving process, and it’s killing them to watch. They are all back in classes and going about their normal routines. Frankie sometimes joins them as well for a run.

We walked to warm up and let Frankie set the pace. It was only a couple of blocks over to the park. When she yawned for the third time, I took pity on her and dashed forward to lift her up. She squealed as I tossed her over my shoulder and jogged about fifty feet before Bubba intercepted and he lifted her and did the same.

Laughter wheezed out of her when Coop made a grab for her, but Archie beat him and carried her through one of the entrances to the park before he set her on her feet. “Y’all suck,” she said, her face flushed pink, probably from a combination of entertainment and being upside down.

“I can,” Archie teased her and moved in like he was gonna kiss her, but she gave him a playful shove and Coop managed to get in there and he picked her up and kissed her. A chuckle escaped me as Coop walked her backwards toward the brick wall and away from the path.

Bubba pressed two fingers to his lips and whistled.

“You’re right,” Coop grumbled as he lifted his head. “They suck.”

“We’re here to run,” Bubba reminded him. “Not get in trouble for public indecency.”

“Who’s being indecent?” Coop demanded but Frankie answered for all of us, and his grunt when she squeezed him had me cackling all over again. “Okay. Fine, I’ll take Frankie home and we’ll be privately indecent.”

“Nope,” Archie said. “Frankie wants to run, so she gets to run. You need to think of something to make that thing go away. No one here needs to see it.”

That pulled another giggle from Frankie, and I studied my baby girl. The laughter was there, but it didn’t stay. The sparkle in her eyes, it had been absent for a while. Grief was an insidious thing. I swore it was like that bitch of a mother haunted her more now that she was gone than she’d ever managed in life.

And I had no idea how to fix this. Coop kept telling us we couldn’t. We just had to be there for her. I wasn’t the only one losing my mind a little. Thank fuck for Rachel— another sentence I didn’t think I’d ever be committing to, internally or externally— but seriously, she had been a goddamn lifesaver with Frankie.

She had gradually begun to spend more time back at her dorm, but she was at the brownstone at least one night out of every three. None of us were arguing, because she and Frankie talked for hours, and other times they just watched every single chick flick known to man.

I swore my man card was in jeopardy with the sheer number of theatrical sob-fests we’d watched with them.

“Dude,” Archie said, and I shook off the maudlin thoughts. Frankie was stretching, with Bubba supervising. “You okay?” He’d dropped his voice so it didn’t carry and I rolled my head around. The cracks released some tension, but not enough.

Just… “I’m worried about her.”

“Same,” Archie answered, and he glanced over his shoulder at her even as he grabbed his foot to do some quad stretches. “But we’re doing everything we can.”

“What are you thinking?” Rather than argue, Archie looked interested. “I’m down with anything if it helps her.”

“I don’t know yet. We need to wrap up the academic year and talk about June.” Our month.

Archie nodded once. “But I think we should— fuck, I don’t know. Take her somewhere she doesn’t have to think about this anymore?” I was asking more than telling.

Releasing a sigh of his own, Archie gave a little shrug. “I’ve been thinking about that. A lot. Maybe taking her to Iceland or somewhere north where she can see the Northern Lights. Do something utterly unexpected and just keep her distracted with sex and play. At the same time…”

“Yeah,” I agreed with the unspoken thought. “I don’t know if that’s what she needs right now either.” It was hard to just— wait and see. Being there for her was what we could do. But until then, we what? Waited?

“Come on slackers,” Coop called and I shook off the worried expression. Arch did much the same. We were all doing it. Tucking the feelings away and keeping our attitudes and expressions as upbeat as possible.
Heather Long. Songs and Sweethearts ARC: Untouchable Book 10 (Kindle Locations 781-815).

Now along with finishing up the semester, there’s also the contract negotiation for Frankie and Ian. Ian is thinking of delaying things even more. Frankie, however, finds out from Dominic and insists they continue as planned.

We get to see KC and the rest of Torched, as Frankie and Ian start their musical journey. I think I may have detected the hint of a possible series hidden in those interactions.

I find myself trying to come up with adequate words to describe this book, it’s beyond anything in the series so far and I became more addicted with every page. The relationships are more than a little complex and the way every single character has grown is obvious at every turn. Every emotion is represented in this book, and I felt every single one.

To say I can’t wait for the next book is an understatement. 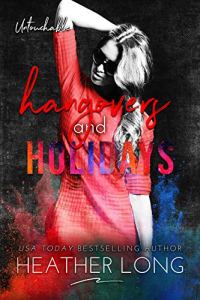 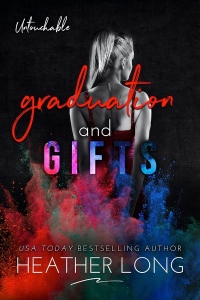