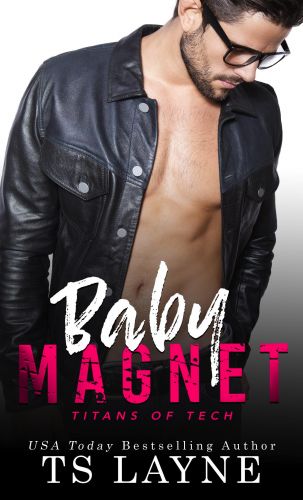 Corporate Raider, Ruthless, Devil in a Three-Piece Suit. As CFO of Steele Conglomerate, I’m all this and worse. My only salvation is a nightly confessional at the altar of Lisa Liu’s bar. So when some d-bag leaves her high and dry, facing single motherhood – I step in—find my absolution. But Lisa doesn’t need rescuing and doesn’t want a Knight in Shining Armor. She wants all the things I can never give her – commitment, marriage, a family. But the more time I spend with Lisa and her daughter Polly, the more I want a shot at heaven.

They say the road to hell is paved with good intentions, and that road runs right through Owen Donahue – my biggest mistake I’ll never regret. He wasn’t supposed to be anything more than my favorite regular. But now that he’s pursuing me with the same relentless determination he reserves for corporate takeovers and offering me the moon, I keep saying yes when I should be saying no.

I can never tell Owen what happened the night our drinking game went too far – because the best thing that ever happened to me is the one thing that will make him walk away.

As this book opens we’re taken to the past when Lisa first started working at Danny’s private club, the Whiskey Bar. It’s where Owen, Harrison aka Steele and Stockton hang out and sometimes play a few hands of poker. Owen doesn’t stay out late, he’s still responsible for his underage siblings.

Lisa isn’t taking anything from customers, no matter who they think they are. She does however present his drink to him with a cartoon sketched on it. These are a source of many giggles throughout the book.

This is a favorite scene, before things get spicy.

Oscar is one of the few people I know taller than me, and he’s twice as wide. No one’s getting past him. I hand over my embossed leather medallion with the Whiskey Den logo on it. It’s like this every single time, even though Oscar sees a core group of us nearly every day. Danny doesn’t play favorites, even though he should. My friends and I bought his first still.

Oscar pushes the door wide with a smile. “Good to see you, O. Danny’s got a surprise for you today.”

“Yeah?” My curiosity is piqued. Danny hates surprises, including giving them, but I’ll play along.

“Behind the bar,” Oscar says with a lift of his brows and a nod of his head past the antique boiler that dominates the space. “I think you’ll appreciate it.”

I enter and scan the bottles on either side of the antique mirror centered over the bar, searching for a new bottle of rare vintage of Scotch. But I don’t see anything out of place until my eyes land on a shapely, highly squeezable ass in red leather pants and a black tank top. “Oh, holy shit, what’s this?” I murmur, taking my fill of the view in front of me. “What happened to Maurice?” I ask Danny as he pulls me in for a bro hug.

It should be the best damn day of my life. Instead, my day has been absolute shit. There’s nothing like having to cancel the biggest acquisition meeting of my career because my baby sister got suspended for telling her chemistry teacher to “Go royally fuck yourself.” She’s only one month into high school and I’m seriously questioning my ability to survive the next four years before I can finally punch my freedom card.

“It just got a helluva lot better.” I lift my chin to the beauty behind the bar, watching avidly as she stands and turns our direction. My mouth dries as I take in her heart-shaped face, full cherry lips and wide dark eyes. Her legs seem to stretch for days which is fine with me, because at 6’7″ I’ve always gravitated toward taller women. She doesn’t look old enough to serve more than Shirley Temples and fuck me for being a full-on perv, but my balls tighten at the thought of tapping that. Especially when I read the white glitter script that says “Bite Me” across her ample chest.

I would bite and lick every inch of those curves. I’d lose my hands in the silky black hair that hangs in a long braid over her shoulder, and when her body was languid from the orgasms I’ve given her, I’d bury myself so deep we both see stars. The image of us with limbs tangled comes so fast and sharp, my throat burns. “Where in the hell did you find her?” I murmur under my breath.

Of course. Danny may make the best whiskey I’ve ever tried, but his superpower is dealing in information. Somehow, he has minions in the brightest and darkest corners of the city, not unlike his notorious great-grandfather.

Danny’s voice turns dark. “But don’t get any ideas.”

“Why? You tapping that?” I say with more aggression than I intend, embarrassed that my thoughts seem so transparent. I’m already short-tempered thanks to the emotional drama with my little sister and missing out on personally firing the CEO of Air-Nautilus.

“Hey, asshole,” the young woman barks, before Danny can answer. “I don’t care how hot you look in a suit, or how many zeroes you have in your bank account, these” – she points to her tits – “are called breasts and you’ve just used up your free pass to take a look. Eyes up here.”

My eyes jerk to hers and the electric current that runs between us shocks me out of any response. She feels it too, because the contempt in her eyes is replaced with a smolder so hot my skin burns.

Beside me, Danny chuckles.

But I don’t look away. I refuse. I need a win someplace today, and Little Miss Bite Me is sure as hell not going to win the showdown she initiated. I don’t back down in the boardroom, and I sure as hell don’t back down in the bedroom. My payoff comes in the form of delicate pink, kissing the tops of her high-boned cheeks. With a press of her lips she breaks our connection by turning her back.

“And while we’re discussing my breasts,” she calls over her shoulder with a throaty burr in her voice that wasn’t there a moment before. “Let’s get a couple of things straight.”

She grabs the bottle of Macallan 25 and pours a measure into a rocks glass. “I don’t clean house, give massages, play Barbie, call people ‘Daddy’ or engage in other weird fetishes you might have.” Her eyes flash with challenge, daring me to protest. “I don’t like K-pop, my vagina’s no tighter than any other woman’s, and I’m never gonna ‘cure your yellow fever.'” She throws up air quotes. “Understand, pretty boy?” She shoots the glass across the bar with a raised eyebrow.

Pretty boy? I’ve been called a lot of things in my young life but never pretty boy. Ruthless? Check. Devil in a suit? Check. Formidable? Check. Asshole? Overbearing? Three checks, compliments of my sisters. It takes a full second for my tongue to reconnect with my brain. “Don’t worry, princess,” I retort. “The only fetishes I indulge in are the ones my partners request, and I give no shits about the size of your tits. I’m an ass-man. Got it, honey?”

Don’t get me wrong, I love tits, but grabbing a handful of ass while I’m driving into a woman who’s begging me to give her everything? Much more satisfying.

Danny clears his throat with a dry chuckle. “Owen, meet Lisa Liu, my new bar manager and second in command. Lisa, this is Owen Donahue, CFO of Steele Conglomerate and a buddy of mine from Stanford. Go easy on him, it’s his birthday today,” he says with a smirk. “He’s spent the better part of the afternoon trying to keep the headmaster of St. Anne’s from expelling his kid sister.”

Danny of course, finds my family troubles endlessly amusing. Lisa, however, does not. Her eyes condemn me. “Let me guess. Justice was served with a wink and a five-figure check?”

Heat rises through me because that’s pretty much how it went down, and the judgment in her eyes makes my skin tight.

I glare at Danny. “Is she this way with all your members?” I grit, scanning the space until I find my best friends and colleagues. Steele, Stockton, and Mac salute me from the wingbacks in the corner, grinning shamelessly. They’ve heard every word.

Danny’s hand lands on my shoulder in a firm grip and a flinty gaze. “You earned that. And Lisa knows she has my full trust.” Meaning, no amount of snark or insolence that spews from her lips will be disciplined by him.

The initial urge to bite and lick her is replaced by a stronger urge to turn her over my knee and spank her until the sounds coming from her smart mouth turn to moans. I’m spoiling for a fight tonight, and if she wants to bring it, game on. Danny be damned.

I brace my hands on the antique mahogany bar and smile grimly. “Let’s just say the right heads always roll for the right price,” I snap, ready to be done with this day and the disturbing level of attraction her snark has generated.

I’m equal parts frustrated and aroused that she still doesn’t back down. She places her hands on the bar, opposite mine, and leans in, eyes like glowing coals. “Hmm. Funny, I’ve found that a well-placed kick in the balls is much more effective than money at getting the right heads to roll.”

She says it sweetly, with a saccharine smile, but her eyes are still sharp as obsidian. Behind me, I hear Mac chortle. Still holding my gaze, she gently pushes my scotch until the cool crystal bumps my hand. “Enjoy your birthday beverage… Mr. Donahue.” She turns way, dismissing me.

Once again, I’m shocked silent by a bolt of arousal driving straight to my balls at the way the word “mister” rolled off her tongue. I wrap my hand around the glass, holding it so tightly that the edge of the bevels press uncomfortably into my skin. The momentary pain distracts me from the inferno rushing through me. I take a healthy gulp of my scotch and seek out my friends.

“Well?” Steele leans forward, a light in his eyes as I drop into the wingback across from him. “Is there birthday pussy in your future?”
TS Layne. Baby Magnet: A Titans of Tech Novel (Kindle Locations 144-208). Shady Layne Media.

When Lisa finds herself pregnant, she refuses to say who the father is. Danny, Owen, Steele and Stockton take on the role of helping her out. Her child would want for nothing.

As this tale unfolds there are hints as to who the father is, but the father himself is clueless. This is all made worse since Lisa remembers the night, but he doesn’t.

I laughed, cried and sighed a bit too as everything unravels. 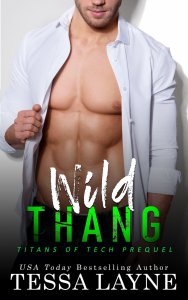 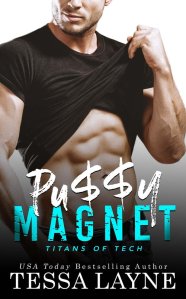 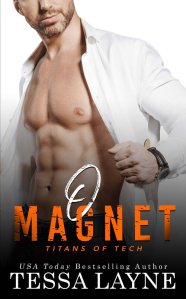 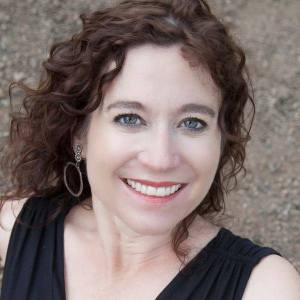