Is This Player Ready for a New Game?

KILLING TIME IN A SMALL TOWN is the name of a new TV show, but it also describes how bad boy Mick Winchester has been feeling about his life. He supposes he deserves his reputation as the Big Bad Wolf, considering his infamous tattoo, but he’s a little tired of his wicked lifestyle. Maybe it’s time to stop trying to heal a broken heart in the arms of so many women and find just one.

But then a TV show crew rolls into his hometown. The producer is none other than Caroline Lamb…Mick’s college lover. Caroline has changed. Gone is the nice southern girl with big-city dreams. This Caroline is a Hollywood hotshot all wrapped up in a thousand-dollar power suit and killer spike heels. And Mick wants her more than ever.

She’s Desperate for a Hit

Caroline–Caro–Lamb isn’t the barracuda she pretends to be. She’s just desperate to make her murder-mystery show a hit. She can afford no distractions…and her former lover, playboy extraordinaire Mick Winchester, is one huuuuuge distraction.

Then there’s the little problem of a real corpse turning up on the set.

The network bosses are ecstatic. Think of the ratings! But actual murder is way too much reality, even for Caroline. Especially when all clues point to someone very close to Mick Winchester.

With her career on the line, her heart completely vulnerable, and a murder to solve, Caro can’t possibly get involved with the sexiest man she’s ever known–again! And no way would the consummate ladies’ man fall for a woman whose whole lifestyle means she’ll be leaving his world very soon.

Love is out of the question.
If only their hearts remembered that.

NOTE:
This is an updated/modernized/expanded reissue of the original book Killing Time published by Harlequin.**

While this is a standalone book, I do recommend you read the first book of the series ‘Just About Perfect’ first. There’s a lot of crossover especially with the Winchester family.

This book opens with realtor Mick Winchester being threatened by an old friend Louise Flanagan at gunpoint. She wants him to be naked and her rumbled when her father shows up. She would save Mick’s reputation by forcing him to marry her. Ironically it while this interaction is occurring that his morning appointment shows up.

Caroline ‘Caro’ Lamb is the producer of the reality show ‘Just Killing Time in a Small Town’ that will be filmed here. She needs to rent a room, since the rest of the cast and crew will be filling up the Bohemie Inn and she wants to distance herself from them a bit. She’s not sure what she just walked in on as she approaches Mick’s office, but she does put an end to the scene. Just not in a graceful way.

We also get to see Sophie quit her job at the church in a confrontation with Miss Hester. Unfortunately, more than couple other people hear it at the same time. We also learn at this time Miss Hester has a secret.

Sophie’s house is one of the places Mick shows Caro, unfortunately for Mick she can’t live there, due to her severe allergy to cats. It’s the next place she decides is perfect and Mick doesn’t enlighten her on who owns the home. The bedroom suite is perfect as is the rest of the house. She thinks a lovely older woman is the homeowner when in reality it was just Mick’s mother stopping by his place to bake.

Mick and Caro have history and they are both fighting the attraction. Caro is avoiding Mick as things get under way with the show.

SURPRISINGLY, NO ONE in the cast—or the crew—was killed on the set of the reality show the first day. Even more surprisingly, Mick wasn’t either.

He’d expected Caroline to come after him with both barrels—or a meat cleaver—after his parting shot in her trailer that morning. He still didn’t know what impulse had made him give her that salacious look as he’d left her so-called office.

Because she thought the worst.

Yeah, that was probably it. Because just like in the past she’d accused and found him guilty in one snap judgment. He’d let her think his comment about the couch was a come-on. It hadn’t been. At least, he didn’t think it had been. Considering his brain had been pretty mushy since Caroline’s surprise return to his life, he couldn’t be entirely sure. Could be the big bad wolf on his ass had been in control of that conversation.

Tonight, when Caroline had returned from the Little Bohemie Inn a few hours earlier than she had all week, he was prepared for fireworks. But she seemed to have forgotten all about what had happened this morning. One glimpse of her pinched, weary-looking face, and he knew the arrival of the cast had been less than auspicious.

“Beer,” she said the minute she closed the front door and dropped her briefcase on the floor in the foyer.

“Porch,” he replied, just as succinctly.

She turned right around, and yanked the door open again. Somehow, she managed to kick off both her high-heeled shoes midstep as she walked onto the porch. He heard the fridge open and close, then the hiss of a bottle being uncapped. She was pulling a deep draught of it by the time she walked back into the house. “Ahh,” she said, wiping off her lips with the back of her hand.

Totally non-Caroline. Somebody had had a bad day.

“I wasn’t expecting you so early.” He didn’t approach her, never leaving the kitchen counter where he’d been chopping up some veggies for dinner. He’d planned a dinner for one, since she had never returned from the set before 9:00 p.m. this week. Without asking, he grabbed another handful of mixed vegetables and tossed them in the colander.

She walked toward him down the narrow hallway, then through the archway into the kitchen. “Food.”

She didn’t even react to the joke.

“I’d give my Vera Wang gown—the one I bought for last year’s Emmy’s by taking out a second mortgage on my condo—to be sitting in a mud bath at the Casa de Helena spa in San Diego.”

He glanced toward the back door. “It hasn’t rained for a few days, but the garden might still be a little muddy.”

“Oh, don’t I know that it hasn’t rained,” she said, taking a seat at the kitchen table. She sipped again from her bottle. “Renauld was cursing Mother Nature all afternoon.”

Without being asked, he scooped up a big bowlful of tossed salad and walked it over to her.

Remembering it was her favorite, he grabbed a bottle of French dressing from the fridge and put it beside her salad. Then he returned to chopping vegetables. “Why did he want it to rain?”

“Atmosphere. He wanted a rainy, gray day when the contestants arrived. Forecast called for it today, which is why he brought them in instead of waiting until tomorrow, when they were supposed to come. Everything was thrown off to take advantage of the rain.”

Mick tossed the vegetables into a pan to stir-fry them, distributing them over the hot surface. “But the rain didn’t show?”

“Is this guy a fool or what? How does he keep his job?”

Caroline shoved a big mouthful of salad in her mouth, cooed a little, then dug in again before answering. “He’s been around forever. I think he must have something on the head of the studio. They keep him busy, but always away from L.A. where they don’t have to deal with him.”

She ate a few more bites before answering. Then, with a roll of the eyes, she explained, “He had the crew pull a tight shot of each person getting out of the limo and doused them with a sprinkler.”

He grinned, picturing the scene.

“Only, he didn’t know the hose was hooked to a well.”

She nodded. “Yep. The first woman who got out, a redhead in a white dress, started shrieking first about her clothes, then about the smell of the water.”

Mick wondered where Jared had been during this whole fiasco. Or Gwen’s Aunt Hildy. The old woman had been front row center, he’d lay money on that. If there was excitement to be found anywhere near the inn, she was sure to be part of it.

“He had one of the sound guys flipping a big piece of flat aluminum to make storm sounds, but the aluminum got slippery from the sprinkler, flew out of the sound guy’s hands, and nearly decapitated another contestant.”

This time Mick snickered out loud. She shot him a look that said she didn’t appreciate his laughter.

“Come on, Caroline, you gotta admit it sounds pretty funny.”

She shook her head. “Yeah, so funny that one of the other contestants burst into laughter. Which made the nearly decapitated one shove him. And, since the ground was wet…”

Trying to keep a straight face, Mick said, “He fell?”

Mick bit the inside of his cheek this time.

“He took-out four other people along with him, until nearly a carful of our enthusiastic, energetic contestants were throwing mud into each other’s faces.” She finished off her beer in one long pull. “My God, if they’d been naked we could have charged money and sold drinks.”
Leslie Kelly. Just Killing Time (Kindle Locations 1577-1621). Kindle Edition.

The show takes center stage and there is plenty going on. A side romance with one of the contestants and the lead camera person is just one.

Then there’s a real murder that comes into play.

Suspense and laughter abound in this delightful simmer to sizzle romance. 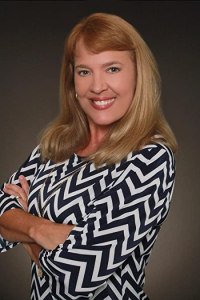 When I’m not chained to my keyboard writing, I’m enjoying my life with my husband of 25 years and our three daughters. Let me tell you, raising three girls has been way more challenging than publishing fiction!I write sexy novels for Harlequin, and also write dark romantic thrillers as Leslie A. Kelly.