The stars brought them together.
The stars didn’t expect the carnage.

Investigative journalist Laurel is on a mission. Women are going missing, women who registered with the Hot Tatties dating agency. On the hunt for the story that will make her career, she joins the agency, but when her match turns out to be a hunky alien warrior, everything changes. Aliens are real. This could the scoop of the century. To write her story, she’ll have to get close to him, closer than she had planned, closer than is safe for her guarded heart.

Alien warrior Rune is losing control. If he can’t get his human female to mate with him, he could go on a crazed rampage and end up endangering his crew. She’s his only chance of survival, but when Laurel disappears, his life hangs in the balance. Her choice could make or break everything.

They couldn’t be more different. Yet when the universe pushes them together, sparks fly, explosions occur, and everyone might be in mortal danger.

Things have been going well for both the Hot Tatties Dating Agency and Vikingar. Many matches have been made and more are in the works. Somehow Exposure Magazine has picked up on many women going missing and want the story. They’re convinced it’s human traffiking and as such they are sending in Laurel, their best investigative journalist. She picks her alias dons a blond wig to cover her recently dyed blue hair, fills out the paperwork and gives the required DNA sample. She’s more than a little skeptical as to the DNA part, after all that would be a major scientific breakthrough, not something a small, privately owned dating agency would  have access to.

Rune is the captain of the Huginn for now, Errik has stepped into the Captain of the Valkyr, and Njal is on leave until Steff gives birth. It comes as a surprise to Rune when he gets the call a match has been found for him. He’s determined to take it real slow and not get any information on his mate until they meet face to face. He doesn’t want the fýst to start prematurely.

Unfortunately, the fates have other ideas and on her way to the shuttle Laurel falls and breaks her ankle. Rune instructs the shuttle crew to port Michelle from Hot Tatties and Laurel to the Huginn since they have state of the art medical pods.

Of course, Laurel is going to freak out. Michelle does her best to calm her, but she just decides she’s hallucinating. It’s not until the pod has done the job that Rune gets really upset. It seems the pod did away with Laurel’s blond wig.

But first, I had to deal with her hair. It had been a pale yellow when I’d laid her in the pod, but now it was blue, a brighter shade than my own, but still very much blue.

“You were supposed to set all the parameters to Peritan!” I yelled at him while he frantically swiped through the medpod’s settings. “You must have made a mistake!”

“I didn’t make a mistake. I swear. There is nothing here that should have done anything to her hair. Why would it? Hair isn’t an essential part of Peritan anatomy. The medpod shouldn’t have impacted it at all. I can’t explain what happened.”

Klav was out of breath, sounding just as anxious as I felt. If it had changed the colour of her hair, what else had the medpod messed with? What if it had altered her organs? What if it had hurt her more than it had helped?

“First, you explain why your accent is gone. Why is your English suddenly so perfect?”

I growled softly. She was challenging me. I liked it.

“You’ve been fitted with a translator implant. Before, I was using my rudimentary language skills. Now, I am speaking my mother tongue while the implant is translating for you. It makes communication easier, so I thought you’d like having an implant.”

“It’s real,” Michelle interrupted, hurrying to us. She’d been talking to her boss via her primitive communication device. “Laurel, I’m sorry you didn’t get to have the same slow introduction as everyone else, but it’s too late for that now. I promise you, these guys are real. As is the spaceship we’re currently on. Would it help you to see the view?”

I glared at her. “No. Not now. First, I want to know about the hair. If my mate is in danger, I have to know.”

To my surprise, my little mate erupted like a fire-mountain. “Oh for fuck’s sake, it was a wig! Your weird machine dissolved it. This is what my hair looked like all along. Now stop all this before I have to check in to a psych ward!”

“What is a wig?” Klav asked before I could pose the same question.

Michelle sighed. “It’s fake hair, basically. People wear them for a variety of reasons, sometimes because they don’t have hair left or are losing it due to illness.”

“I’m not. I just didn’t like the blue anymore,” my female muttered. She sounded tired. It was little surprise, the healing process would have used up a lot of her energy. She needed to sleep.

I scooped her out of the medpod and hurried away, ignoring the shouts echoing after me. Usually, she would have stayed in a cabin on the Valkyr while preparing for our first meeting. Now that we’d already met, there was no reason for her to re-join the other females. She could stay with me.

I ran to my cabin as fast as I could without making it too uncomfortable for my mate. She squirmed in my grip, feebly demanding that I let her down, but she didn’t know what she was saying. She was tired, confused. Of course she wanted to be with me, her mate. Once she’d got a good night’s sleep, she’d come to her senses.

I breathed a sigh of relief when my cabin door slid shut behind us. This wasn’t how I’d imagined meeting my mate for the first time. I’d wanted it to be just the two of us. Errik, the Acting Captain of the Valkyr, had met his female in what Peritans called a candle-burnt date. He’d even brought her plants from her planet’s surface. It had sounded very romantic, even though I didn’t understand the point of the candles or the plants. But living in space, raiding other species’ ships, for over two decades had taught me that all alien species had their own customs, no matter how peculiar. There was no use in trying to tell them that they didn’t make sense or were based on silly superstition. They believed in their little rituals and good for them.

“Let me down!” my mate demanded. What had Michelle called her? Laura?

“Don’t struggle, Laura, I don’t want you to hurt yourself.”

“Laurel!” she hissed. “And the only reason I got hurt is because-“

“Because I wasn’t there,” I completed her sentence gravely. “And I am so very sorry about that. I shouldn’t have listened to Njal and the others. I should have known what’s best for my mate. But we shall talk about all that tomorrow. You need sleep. The medpod caused your broken bones to heal, but it drew on your body’s energy to do so. You’ll be weak for a few days. But do not worry, I will guard you at all times. No harm shall come to you.”

She looked at me as if I’d grown a second head. “None of that made any sense. Now let me down!”

I carefully placed her on my bed. She looked tiny on the mattress that was big enough to accommodate two Vikingr warriors. I was glad. Once I joined her, I wouldn’t have to be too worried to squash her in my sleep.

I remembered that Peritans liked to be cocooned under a blanket when they slept. “Huginn, I need two blankets.”

“Affirmative,” the ship’s cool voice replied instantly, followed by a flash of blue light. Two thick blankets appeared at the foot end of the bed.

“Magic,” Laurel gasped. “Or just another hallucination? I don’t even know anymore.”

I spread out one of the blankets above her, covering her up to her chin.

“Sleep,” I said gently. “I will watch over you. Sleep and recover.”

She looked like she wanted to protest and sit up again, but exhaustion was catching up with her. Her eyelids fluttered shut. I watched with a smile as she fell asleep, her breathing becoming more even and the frown turning into smooth skin. Now that she wasn’t glaring at me, I could inspect her properly for the first time. Her blue hair was shorter than the fake yellow hair had been, only reaching to just below her ears. I loved the colour. Her skin wasn’t blue like mine, but at least her hair was. Her thick lashes were brown, however, deepening my confusion. Was my mate like one of those Peritan animals who could change their colour? It would also explain why her fingernails were bright red. Small dots were painted on her nose and cheeks. War paint? A tribal sign? I’d have to ask her tomorrow. I clearly didn’t know as much about Peritans as I thought I did.

My communicator vibrated at the same time as my cabin’s viewscreen activated.

“Outside!” I whispered to the image of Captain Njal, before hurrying out of the room with one last glance at my sleeping mate.

The cabin next door was empty, so I went in there, leaving the door open so I could hear if anyone approached. I’d promised my mate to guard her. Just to be safe, I turned on the camera in my cabin and split the viewscreen in half, one side showing her, the other Njal and his female, Steff.

“What is going on?” Njal asked, his expression serious. “Klav contacted me, but I want to hear your side of the story.”
Skye MacKinnon. Berserkr (Kindle Locations 464-520). Peryton Press.

After all is said and done, even with Rune in the throes of the fýst Laurel decides to return to Peritus.

Of course, she thinks she has the scoop of the century, what with aliens and all. She has no proof and even takes the intern Jenna on excursion to seek out the house where some of the Vikingar are waiting to be matched. Without being able to prove anything she loses her job, and we get to see the other side of mating.

This book had me crying and screaming at Laurel to go back. It’s quite the emotional rollercoaster and well worth the ride. 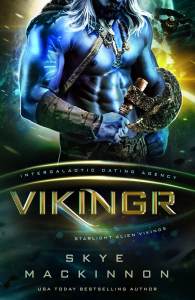 When she’s not typing away at her favourite cafe, Skye loves dried mango, as much exotic tea as she can squeeze into her cupboards and being covered in pet hair by her two bunnies, Emma and Darwin.