Roark Archer’s Lamar Canyon Pack in Yellowstone has been decimated by ranchers and hunters. Although the Tao pack in Los Lobos, South Dakota, has offered to assimilate it, he cannot give up his heritage so easily. At least not until he gets revenge against whoever killed his best friend, Jared, three years ago.

Recluse Carrie Myers lives on the Wyoming cattle ranch her late father left her. One fateful night changes her life forever, leaving her questioning her sanity. She knows what she saw…or does she? Regardless, she’ll do anything to protect the awful secret that has haunted her for the past three years.

When fate brings Roark to Carrie’s doorstep, the connection between them is undeniable. Determined to avoid commitment, they agree to give in to their unexplainable attraction for one night. Will hatred consume this hell-raising shifter, or can he learn love and forgiveness in the enemy’s arms?

Living alone on an isolated ranch, Carrie can’t afford to take chances. When a violent storm causes her to investigate outside she is confronted with a huge black wolf. On instinct alone she shoots it and buries it. But was it really a wolf, could she believe her eyes. Finding a claw on the ground she puts it away, not really wanting it but not wanting to go near what she buried again.

Even though he knows joining up with the Tao pack is best for him and the others in his pack, Roark finds he can’t, not yet anyway. He needs closure, he needs to find whoever killed his best friend and bring them to justice. All he has to go on is the telepathic image Jared sent him before he died. Drew has generously granted him time. With only that image in his mind he has to find where Jared died before that time is up.

Driving through a heavy downpour on his way to help the pack with the move, the vehicle he’s driving hydroplanes into a ditch. With no cell service he treks through the rain to a ranch arriving shivering and drenched.

The night reminded Carrie of that night long ago and she almost let the shivering man walk off instead she invited him in and fed him steak. This is a favorite scene taking place after dinner.

While she headed up the narrow stairs, he followed with heavy, masculine footsteps. Something about him reminded her of… the face, the lightning flash image of the creature who rested in her field. She’d never forget what it looked like or any detail about the awful night. Never stop wondering what in the heck she’d buried. At least once a week, she had a nightmare about it and awoke drenched in sweat. It was nice to have company even if she was probably a fool for allowing it.When he gripped the banister from behind, she noticed the fingernail was missing on his left pinkie.

“What happened to your finger?”

He pulled it away. “Just a little tangle with a buffalo.”

Her mouth opened in surprise, but she closed it again. Obviously, he made it up. The imperfection made him more appealing. They passed the master bedroom first. Except her, Roark was the first person who’d seen it since her father’s death.

She hoped he wouldn’t think she was strange for keeping Daddy’s things the way he’d left them— his leather pipe pouch, cowboy hat, and even a half-empty bottle of aftershave. When so many things had changed, why not keep something the same?

“Your father’s room?” he asked.

She fingered the buttons on her shirt. “I like my room fine. I’m used to it.”

When they passed it, he glanced inside. She hadn’t changed it much from her girlhood. Posters of horses, faded now, still adorned the walls. He’d probably think they were silly, too. Why on earth was she sharing the sacred privacy of her home with a stranger? There was something special about him she couldn’t explain. It felt as if she’d known him an entire lifetime.

Did he sense it, too?

“Here’s the guestroom.” She scurried to the bed to beat the dust off the pillows.

He tossed his wallet and keys on the nightstand. Then he laid his warm hand on her shoulder, too lightly to offend. Instead of shaking it off as she had earlier, she rotated under his touch, secretly craving more.

“You don’t have to go to any trouble,” he said. “Everything looks very comfortable.”

“All right. Let me know if you need anything else.”

His fingers drifted over her collarbone, up to her chin. “There is one more thing.”

“What?” Her throat was so tight her voice erupted in a croak.

Without consulting with her brain first, her head nodded.

When he leaned down, his black hair tumbled forward. It must have slipped out of the rubber band. Without contacting her with anything but his mouth, he brushed his lips against hers. A flame erupted inside her with the power of a gunshot. She knew she’d never be the same.

He straightened, fixing her face with his questioning dark eyes.

He gripped her cheeks with strong hands as his mouth closed in on hers, harder. Longer. His square jaw brushed against her face, sweeping her into a cyclone of sensation. She gave herself to him and the kiss, lifting weak and shaky arms to tangle her fingers in his glossy hair.

He smelled heavenly, like spicy oranges cooking in a scorching canyon. His lips parted, unleashing a hot, questing tongue she felt down to her toes. You’re mine, it said.

There’s a lot more going on here then meets the eye. All of which needs to be resolved. It kept me in suspense and wondering how on earth these two could possibly get together. A fun, fast and sexy read. 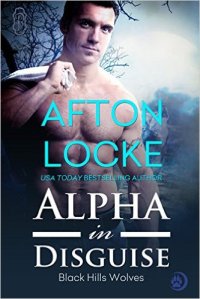 Afton Locke is a USA Today Bestselling Author who prefers romantic fantasies to everyday reality. Fantasies take her to different times, races, places, and beyond. She lives with her husband, dog, several unnamed dust bunnies, and a black cat that can be scary or cuddly, depending on the current book. When she’s not writing, Afton enjoys hiking, cooking, crafts, and reading.