He’s broken in body and spirit, but she’s not giving up.

Leave me the hell alone. Is that so freakn’ hard to grasp?

Yeah, Derrick is angry, and bitter, but with good reason. His army buddies should have left him to die instead of dragging him out of the rebel camp–and he meant drag. Shrapnel to his back ensured his legs are useless hunks of meat. Everything below his waist is useless.

As if that wasn’t bad enough, fate just has to kick a wolf when he is down and send him the curvy and luscious Janine. According to his inner beast, she’s his mate. Not happening. There will be no claiming because Derrick isn’t about to saddle anyone with half a man.

Problem is, Janine, with her fiery red hair and tempting curves, won’t leave him the hell alone. She thinks she can fix him. And a part of him, the part that refuses to give up hope, is tempted to let her try.

Can she teach this broken wolf new tricks–including bedroom ones–that will make him howl once again?

Derrick is impossible, no therapist has been able to reach him, his wolf is angry and close to the surface and now he has only one last chance before the Council makes a decision that could end his life.

Janine kind of knew what she was getting into when she was assigned to be Derrick’s new therapist. What she didn’t know was that she would be so attracted to him. She wasn’t going to let him get away with hiding himself away, not anymore.

I really loved the interaction between these two, the problems Derrick has are real in so many cases. Janine took everything he threw at her in stride and gave it right back to him with a twist. This scene at the pool is one of my favorites.

On the list of things Derrick shouldn’t do, dragging his new therapist into the water was probably one of them.

It’s her own damned fault.

Telling him she liked the look of his body. A bald-faced lie. Had to be. What woman would find a man whose legs had lost so much muscle mass, and dangled limper than noodles, sexy?

What of the scars scoring his skin? Red lines. Bold spots. Jagged lightning leaving behind ridged skin. Most of his wounds had healed nicely, except for those drawn with silver. Those took much longer to heal, and they crisscrossed his body, telling a story that he couldn’t forget.

And Janine saw them all. Saw all of his imperfections, didn’t recoil from them, called him attractive, and then, to add even more insult, she offered him a helping hand.

She thinks I am weak.

Awoo. He almost howled with the indignity of it. Instead, he didn’t think. He acted. More like yanked on the hand she dared extend.

She surfaced with a screech. “That’s freakn’ cold!”

Treading water beside her, he couldn’t help but feel a faint tug on his lips. Surely not a smile? He clamped his teeth tight together. “It’s refreshing.”

“It’s f-f-reezing,” she managed to stutter through almost blue lips.

Hmmm, perhaps the little human was more fragile than he expected. Too bad. “Next time don’t stare.”

“How about next time you don’t try and drown me?”

“You aren’t in any danger.” At this end of the pool, the water had a depth of just under five feet, and if she stood on tiptoe, she could keep her head above water.

“This is not how you are supposed to treat people,” she chastised. “Especially not those trying to help you.”

“Guess that was wildly inappropriate. Some would even say violent. I guess you’ll have no choice but to ask for reassignment.” Somewhere far away from him so he wouldn’t have to fight the urge to lick her each time he saw her.

She slogged toward the shallow part of the pool and the stairs. Despite the chatter of her teeth, he heard her clearly. “You won’t get rid of me that easily, wolf. Actually, I should thank you for this bonding experience.”

He blinked. Tried to figure out her logic, but couldn’t. “What the fuck are you talking about?” Perhaps the cold had affected her mental acuity?

“Part of building a rapport with your therapist is sharing experiences. Mind you, I think my teachers meant more of you sharing your past with me so we could work through it, but if you ask me, sharing a polar dip can also work. Just so long as you don’t expect me to share my ice cream sundaes. Some things are best savored alone.”

“Your logic is whacked.”

And it just gets better from here. So many problems and so many attempted solutions, including a messed up ex boyfriend who won’t leave Janine alone. I really hate men like that.

I did a bit of crying in this one, the way they both kept denying what their hearts and instincts were telling them, damn. I couldn’t put the book down I really needed a happy ending that I couldn’t determine how would happen. 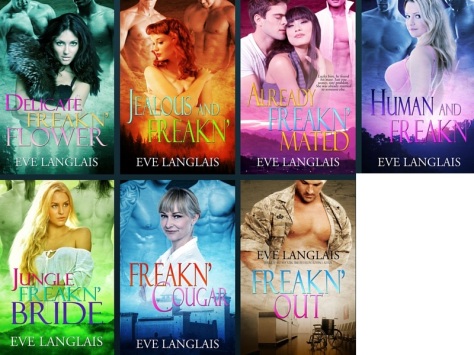 Hello, my name is Eve and I am a Canadian author who loves to write hot romance, usually with hot shifters, cyborgs or aliens. I should warn you that I possess a twisted imagination and a sarcastic sense of humor something I like to let loose in my writing.

I love to write, and while I don’t always know what my mind is going to come up with next, I can promise it will be fun, probably humorous and most of all romantic, because I love a happily ever after.

Thanks so much for coming by and checking me out. If you’d like to know more, read some excerpts or find out what’s coming next, then please visit me at any or all of the sites listed below.