Ilya Dragonovich is no stranger to the dark side. As a safe-house owner for security agency Brute Force, Dragon knows that the battle line between good and evil runs through the heart of every man―and, sometimes, a beautiful woman…

Emma Jane Preston needs help. After her marriage crumbled, she believed she could get back to a normal, happy life. But her ex-husband moved among some shady characters, and now she needs the kind of protection that comes at a cost―one that only someone like Dragon can provide. But can Emma Jane trust this handsome, undercover operator to keep her safe when she is in danger of falling into the arms of the deeply seductive, fiery Dragon. . .and never letting go?

Once again I’ve started  a series at the latest book instead of the first. Fortunately this particular series is only three books in so it’s won’t be too hard to catch up. Yes, I know, I do this all the time and I just can’t help myself.This book is centered on Ilya Dragonovich ‘The Dragon’ and Emma Jane Preston. They have an undeniable attraction to each other, even though she is a soft-hearted and forgiving person and he is far more than just a bad image.

Emma has just been through a nasty divorce, her ex-husband doesn’t like to be denied acting more like a spoiled child than a man.

However breaking into Emma’s house which she almost lost because of him goes way over the line. The only reason it’s still hers is Ilya has designated it a safe house for Brute Force Security. As such the security has been upgraded and that’s how he’s caught. Ilya is not happy with that turn of events.

One of my favorite things in this book is Ilya’s dragon tattoo. It covers scars on his face and to Emma it has a personality all it’s own. I giggled more than once over her observations and Ilya’s response to them.

There is a lot of tension, action and suspense as Ilya makes decisions to protect Emma and there’s plenty of heat as well.

I definitely need to catch up on this series before there’s another book. 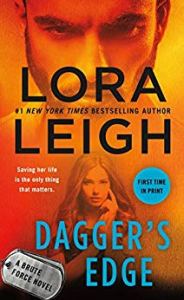 Lora Leigh dreams in bright, vivid images of the characters’ intent on taking over her writing life, and fights a constant battle to put them on the hard drive of her computer before they can disappear as fast as they appeared.

Lora’s family and her writing life coexist, if not in harmony, in relative peace with each other. Surrounded by a menagerie of pets, friends, and a son who keeps her quick wit engaged, Lora finds her life filled with joys, aided by her fans whose hearts remind her daily why she writes.