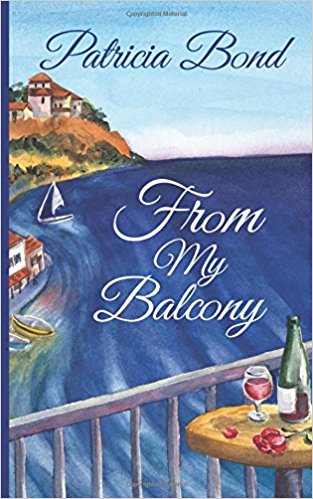 From My Balcony
A Balcony Romance Book 1
By
Patricia Bond

Do you want to live your life or hide from it?

Diana knew she lied to her best friend when she said she wanted to live it. Oh, how desperately she wanted to hide! Hide from her husband’s betrayals, hide from the blame and guilt heaped on her by her younger daughter’s refusal to accept the divorce, hide from the pity, the questions, the snarky innuendos from her “friends.” Most of all, hide from herself and her failures. Her family accepted her need to “find herself,” and this apartment in the south of France was perfect with its balcony and view of the sea and town. Low enough to be able to watch life happen below her, high enough to not participate in any of it. Now if only the gentle people of Cassis would let her do that.

Patricia Bond always seems to transport me somewhere. Whether it be in history or like this book a place that is here and now.

One of the first things that attracted me to this story is the heroine. Diana is not young she is in her 50’s and recently divorced. Now, divorced at that age is more than a challenge, she has grown children with minds of their own and opinions, some of which they really should just keep to themselves.

I could definitely relate to one of Diana’s sentiments of being someone’s daughter, someone’s wife, someone’s mother and having no idea who Diana is anymore. Even her anger and frustrations rang true to me, even at the doves that seemed to have a home on her balcony. What a balcony it is, her friend Mitzi struck gold when she found this place for Diana to rent. Wrap around with views of the harbor and the calanques of Cassis.

In spite of her intent of hiding, Diana does manage to make friends. The portrayal of the many gallant Frenchman had me smiling with every encounter.

This is a favorite scene with Laurent, her landlord and flirt.

“In honor of your first day living in Cassis…” he began, his eyes fixed on me.

“May I take you to dinner? In honor of your first day living in Cassis,” he repeated quickly.

Oh my. I barely knew him. He could be an ax-murderer. My landlord, the ax-murderer. I would politely refuse, see him out and lock the door behind him. I turned away, then spun back, questioning the wisdom of turning my back to him, but not before my glance flitted over the phone lying on the table next to the sofa.

‘You can hide or you can live,’ echoed Mitzy’s voice in my head. ‘Which one do you want?’

I want to hide, I thought. I want to close my eyes and pretend I’m invisible, like Anthony’s cat, Cutie-Pie. If I can’t see you, you can’t see me. I wanted to be invisible to everybody. Even me.

But the man standing in my apartment wouldn’t let me. And damn, I DID want to live! Even if it meant having dinner with an ax-murderer. “That would be lovely,” I said with a smile. “Why don’t you sit down? I’ll be ready in just a moment.”

I stood aside as Laurent stepped forward. I waved him to the sofa, told him to make himself comfortable and disappeared into my bedroom. Behind the safety of the closed bedroom door, I shut my eyes and gulped a quick breath. This is beyond ridiculous. The man is no more an ax-murderer than I am. What he is, is a considerate landlord who wants to take his new tenant to dinner so she won’t have to eat alone on her first night here. Why should the thought be so paralyzing?

I could practically feel Mitzy’s hand on my shoulder. Get a grip! she’d be saying. Hide or live?

Taking another deep breath, I stepped away from the door and stood in front of the small mirrored vanity next to the armoire. I still wore the same clothes I’d worn driving in, and my crying had dissolved any semblance of make-up that might have survived the drive and the unpacking. I knew I was a disaster emotionally today. I had no idea what a physical disaster I was.

But Laurent was waiting in my living room, so whatever salvaging I was going to do, it had better be quick.

I splashed water on my face, brushed my hair and dashed on a little mascara and lipstick. My black sweater was rumpled from the car and my pants had long since lost their crease. I had no idea where Laurent was taking me to eat, so decided against jeans. The black trousers would have to do, but the sweater? No. I looked in the mostly-empty armoire. My choices were limited, given that most of my wardrobe was still in transit. But I did have a midnight blue – “starry night” according to the tag – sweater with iridescent threads woven around the scooped neck. My dark ash-blonde hair with a few strawberry and gold highlights that were supposed to hide the grey lied against the midnight blue. Well, this was as good as it was going to get.

There’s a lot of inner dialog like the scene above, all of it part of Diana’s healing.

Some fun encounters, some touring, the jerk ex-husband and plenty of innuendo make this a delightful and at times sensual journey to finding oneself. 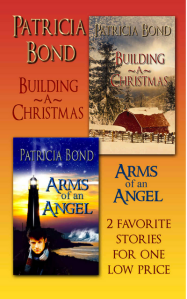 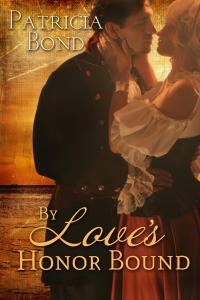 Anytime. Anyplace. Love is all that matters.

They say your childhood dreams and aspirations are your purest, truest desires. They are your destiny.

If that’s true, my destiny was written before I could even read on my own. Like most authors, I’ve carried on a life-long love affair with books. From the time I was about eight years old, my vision of life as a grown-up included having a dozen children and a room at the top of an old Victorian mansion where I would spend my days looking out at the sea and writing stories.

A dozen kids and solitude? Hey – I was eight. What did I know?

Except that I wanted to be a writer.

I couldn’t decide what to write, opting mostly for mysteries until I realized I couldn’t plot an escape route from a three-sided phone booth, much less a murder. It was during a six-week bedside vigil when mom was in the ICU that my sister introduced me to historical romances. I devoured them. The first time I thought “I can do this,” I felt a calm settle over me and a feeling of “coming home.” I was ready to run.

Life… Juggling marriage, a husband with a full-time job and full-time school, four children (I had to down-size my original vision – economics, you know), multiple jobs, my best friend’s cancer diagnosis that led both of us down a metaphysical path as we spent hours talking about destiny, intention, attraction, energy work and more. Life experiences. Rich and full.

It’s all led to this.

Where I was meant to be – right from the beginning.

Ms. Bond lives in the best place on earth – Western New York – not quite close enough to see the waterfront, but close enough that you’ll often find her there, camera and notebook in hand, patient, hero-inspiring husband nearby. “Only” four children, not a dozen, but count in their spouses and grandchildren, and she’s getting closer.

She may still try her hand at mysteries. She hasn’t seen a three-sided phone booth in years.