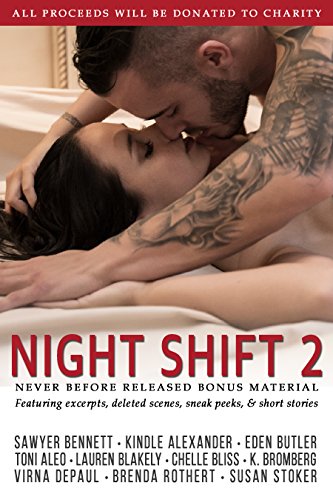 We’re happy to be a part of this special project for the second time.

“More than 34,000 people die by suicide each year,” making it “the third leading cause of death among 15 to 24 year olds with lesbian, gay, and bisexual youth attempting suicide up to four times more than their heterosexual peers.” ~Suicide among LGBT youth

First came love, then came the NHL, then came Baylor and Jayden with a baby carriage.

Join Baylor and Jayden from the last weeks of Jayden’s pregnancy right through the birth of their first child. An extremely emotional read, with the bridal shower and a surprise Jayden plans for Baylor.  I laughed and cried throughout this one. I really must finish reading this entire series!

A man must reveal his deepest secret to keep the ones he loves.

Dylon has been bailed out by his father for the last time. Told to go to the AA meeting his father drops him at or not to come home, he reflects on his screw ups. Confronting his wife with a secret she doesn’t know he has discovered, and then telling his own. A stunning beginning for the book Secrets that I now need to purchase.

The Carolina Cold Fury’s hot new star shows his bad-boy teammates that even nice guys can score big in this steamy hockey romance.

Intent on cheating on his training diet, Max stops at a convenience store. Interrupting a couple of guys intent on sexually abusing the cashier, he discovers something he can’t seem to put aside. The cashier and the children she has hiding in the office.
Just enough of this story to make me want a lot more. Must buy this one sooner rather than later.

Nights With Him
Bonus Epilogue
by Lauren Blakey

Oh how I love this. Instructions on what to where and where to be at what time. A planned tryst for this husband and wife. Leading into dinner and a really big surprise. Another one added to the TBR pile.
5 Contented Purrs for Lauren!

The night before Casey and Nate’s wedding…

Best friends and partners in Joy Delivered toy company, Casey and Nate are getting married. An epic depiction of how to break all of the traditional night before the wedding taboos. Sexy and fun. Now to get the book.

When the clock strikes Midnight on New Year’s Eve, two strangers share more than a toast.

Bruno is a man of mystery. This book opens on New Year’s Eve and he does something he’s never done before, reveals a bit of himself. A night of drunken passion with Callie followed by New Year’s Day at with his family leaves me with as many questions as his sister Gabby. Yes, another book added to my TBR pile.

Bear, the bad boy silver fox, never thought he’d fall in love again. But when Fran DeLuca, a woman who’s known more for her track-suits, transforms into a vixen clad in skin-tight pants and a killer push up bra, he’s tempted to cross a line he swore he never would. There’s only one thing worse than dating his friend’s sister – sleeping with his mother.

This! This is a book I have to read. Fran is not a youngster, and neither is Bear. Unfortunately Fran’s son is his friend and Alfa Pi brother. She is off limits. I wouldn’t want to be him when he sees her in her new clothes, he can’t keep his eyes off her in her track suits. I believe I have to add not one, but two series to my TBR Pile. This one is book three in the Alfa PI series but Bear is introduced in Throttle Me of the Men of Inked series.

An all new second chance romance: When invited to her ex-fiance’s new wedding, Saylor gets more than she bargains for when an old flame offers to be her date.

Saylor responds to her ex’s wedding invitation with a plus one. Only problem is she doesn’t have the plus one. Busy with her new business and really having no intention of really attending, her brother decides she should. It will be good for business. He has an idea for the plus one and calls in a marker to her first love. This one is going to be so good. I really wanted to read more but it’s not out until November. Calendar is marked and I am counting the days until release.

This is a deleted scene story, My Always — Every marriage has a moment—it defines the future, it settles doubt. That moment comes for Keira Riley-Hale when her marriage is threatened and she forgets how to find her way back to her husband. Will a brief getaway to the Tennessee mountains bring Keira and Kona to the moment that changes everything in their marriage? Or will that moment never come?

There has been cause for Kiera to have guilt, lots of it. Almost destroying her marriage because of lies and deception brought about by a man she thought she could trust. Now that the culprit is gone from there lives she has to get past her guilt and open up to her husband again.

Kona has never strayed, never truly given her reason to doubt his love. A break from day to day stresses at their cabin in the Tennessee mountains will either make or break them.

I confess I haven’t read these books but the pain, heartbreak and love that I feel in this epilogue definitely sends me to purchase them.

A sexy quarterback and an adventurous princess turn some serious sexual tension into the romance of a lifetime.

Who doesn’t love a football star and a Princess story? I am a big football fan and have been for most of my life. As such I had some problems with the scoring as described. First there was reference to a one point field goal lead. Field goals are 3 points. As the game is described there were 2 touchdowns for the Knights. If both include good extra point kicks that would be 14 points. A single point lead with that would either be a 2 point conversion on one of the touchdowns instead of the kick for 1, or a safety.

The Bootleggers won with a score of 23, and had 3 touchdowns. That’s 21 with all the extra point kicks. So either they did two 2 point conversions or they missed the extra point on one and got a field goal to make that score.

You are probably wondering why I bring this up when it’s a romance novel. That’s simple really, it threw me out of the story trying to figure out the logic of the scoring.

Since Bella is a major football fan and Kyle is a first string Quarterback, I would expect the story to reflect accurate information.

As much as I like the concept, it isn’t for me unless things are more accurately depicted.

His
Bonus Epilogue
by
Brenda Rothert

Andrew and Quinn are settled in to their happily ever after when a friend turned foe returns.

I loved this one, a little angst, and a lot of love. I really want to know how Andrew and Quinn met up now. Fiji and a beach house and sex on the beach. Another series added to the TBR pile.

See what happens when a Delta Force Operative, Fletch, takes single mom, Emily, and her daughter, Annie on an all-day date.

So much fun! I love Annie and how Emily worries about her. The things Annie comes out with are reminiscent of when my own children were little. Definitely can put a damper on the whole dating thing. A lot of laughs and continuous fun! Bowling, roller skating, and dinner. With Emily and Fletch falling deeper into love. I can’t wait to read more about this blooming relationship.

Former political rivals Jude and Reagan seal the biggest deal of their lives with a kiss.

I love weddings and this one is one of the best I’ve ever read. Set on a beach in Hawaii, it’s a perfect setting for romance. From the description of the Bride’s dress to their vows. Jude and Reagan’s wedding is perfect. I am definitely adding this to my TBR pile.

5 Contented Purrs for Chelle and Brenda!