With her secrets about to come out and her career on the brink of disaster, she turns to the one man who might understand.

Pop star PJ Cantrell’s life and career are threatened when an angry blackmailer uncovers the truth about her hidden past. PJ knows it has to be someone close, someone she trusts. That makes the betrayal hurt all the more.

She turns to long-time friend Gabe Sawyer for help but finds more than she bargained for. As she quickly discovers she wants more from him than friendship and support, she has to wonder what he’ll think of her when he finally learns the truth about her past.

Gabe Sawyer is ready for a change. He’s built an empire in the hotel industry, but it’s time for him to find something to bring back the passion he once felt for his work. He’s tired of living in hotel suites, no matter how swanky the surroundings might be.

When PJ Cantrell shows up on his doorstep, she brings the wrong kind of passion his way. He’s left trying to bury the attraction he’s long felt for her because giving in to that is the last thing PJ needs.

NOTE:
Steamy romance meets heart-stopping suspense in the Sutton Billionaires Series. This is the fourth book in the series but it can be read as a standalone story with no cliffhangers. If you’d rather start at book one, grab The Billionaire Deal by Lori Ryan. A shorter version of this book was previously released as part of the Sutton Capital Series.

PJ Cantrell has a very successful singing career, and has been touring since she was no more than a child. Now much older and she thought wiser, she is devastated to find her journal has been leaked to the press. As she leaves her car at the hotel she is swarmed by the press.

Gabe Sawyer has decided he’s done with his hotel chain and tells his friend Jack Sutton to put out feelers for a buyer. He’s not sure what he’s going to do next but he plans on going home for a while first. It’s not a coincidence that he’s at the hotel P.J. Cantrell is staying in when all hell breaks loose with Paparazzi. Gabe just happened to look down at the entrance from his terrace when it all starts to go down.

Gabe looked down on the front entrance of the hotel. The paparazzi were hawking the door. It was expected tonight with PJ arriving, but he hadn’t thought they’d see quite the number jockeying for position on the sidewalk outside the hotel.

What the hell? Three more of the vulture-like paps had just walked up.

Gabe grabbed his iPhone and punched PJ’s name into a search engine then scanned the top headlines…. He bit back a curse when the news flashed on the small screen and didn’t have to watch much of the video to know why the scumbags waited at the hotel entrance to get at her tonight.

Gabe couldn’t imagine why a man would be willing to walk away from PJ Cantrell. An asshat like Kurt Tolleson had never deserved her in the first place.

When Gabe asked PJ about it shortly after the breakup appeared in the news, she’d been good and ticked off. But this? Having the public see her humiliation…. She had to be reeling from this.

Movement on the street below pulled Gabe’s attention back to the front entrance and he watched as PJ’s car pulled up to the curb. The driver stayed in the car while one bodyguard stepped from the front of the car and opened the back door. Where the hell was her other bodyguard?

Gabe hoped to see him appear from the back, but no. Only PJ stepped out.

He couldn’t make out her face, but he knew it was her. Her coppery red mane of hair and petite body would register with him anywhere. Register and make him hard as a rock in an instant, though he’d learned how to control that reaction around her. They were friends and nothing more.

Gabe growled and went back inside, picking up the hotel phone that sat on a side table near the balcony doors. Whenever he stayed in one of his suites, his line was directly routed to the general manager of that location or to the manager-on-duty when the GM was out. He didn’t know who picked up and at the moment, he didn’t care.

“Get more security out front. PJ just arrived and she only has one bodyguard with her. Get our guys out there now,” he ordered before hanging up and going back outside.

He wanted to run down to her himself and stand between her and the world, but he wouldn’t make it down there in time.

As he watched, someone with a camera reached right past the useless man in a suit trying to block access to PJ. The camera man yanked PJ around as he held his camera up in her face, snapping off shots the whole time. It took her bodyguard too damn long to get the guy off her.

Gabe watched as his staff poured out the front doors and surrounded PJ, whisking her into the lobby and away from the crowd.

In only minutes PJ would step into the elevator. He hoped she remembered his invitation and headed to his tower instead of going up to her suite.

Two years ago, he’d told her if she was looking for privacy or a friend to talk to, she could come up to his penthouse when he was at the hotel at the same time she was—which was often. Over time, they talked more and more frequently because they were both night owls.

He hoped on a night like this, when she had to be feeling angry and hurt by the betrayal of her privacy, she’d come to him.

Shoving his keycard in his back pocket, he drew a shirt over his head before stepping out to the private elevator entrance. He knew within minutes she was on her way up. Only he, his secretary, and PJ had the key fob that would allow them to enter the penthouse elevator.

Gabe paced until the elevator chimed her arrival, and smiled slightly when PJ’s gaze fell on him immediately.

“Pru,” he breathed out, using her first name rather than the initials the world used to address her. She always laughed at him for that, but he liked her full name. Prudence Jane. No one other than her family used it any longer. When she’d been ‘discovered’ she had been using the nickname PJ and that was part of her branding to the world.

She blinked those long, sexy eyelashes his way and he saw she was fighting back tears.

“You saw?” she asked. He didn’t know if she was asking about the video or what had happened with the photographers down below, but he nodded.

“You holding up?” he asked, but he wanted to kick himself. He knew she’d say yes, even when it was clear she wasn’t okay.

“I’m okay,” she said but her teeth caught her bottom lip and he knew she was anything but okay.

He wanted to reach out and hold her, comfort her. But they’d never had that kind of relationship, though at times he felt so close to her it stunned him.

They had spent hours talking on the rooftops of his hotels, and it hadn’t been that long ago that Gabe had started to feel a lot more than friendship toward her. But Pru, so much younger than him, had never indicated she wanted more from him.

For whatever reason, Gabe Sawyer—a man who routinely dated models and actresses and other people in the spotlight—froze up a little when he got around Pru Cantrell. He was sure he came across as some stiff CEO, and he didn’t blame her for thinking that.

He was ten years older than her and was usually wearing a suit or a tux when he saw her. He glanced down at his jeans and bare feet and cringed. Well…until today.

“I just wasn’t really up to going to bed,” she said with a little laugh, and Gabe’s mind immediately filled with images of her in his bed. He pushed them aside as he always did when he was with her.

“Come inside?” Gabe asked, gesturing over his shoulder to the stairs that led to his suite. He’d never invited her in before. Would she think he was trying to take advantage? Or would she understand he just wanted to be there for her after the night she’d had? Gabe felt his heart kick as she nodded yes and followed him up the stairs.
Lori Ryan. ARC The Billionaire Rocks (Kindle Locations 155-203). Kindle Edition.

There is a slow build to this relationship as Gabe invites her to his home in Connecticut and enlists the help of the Sutton’s Security Team to solve the issue of the missing journal.

A very emotional tale unfolds as the heat builds in more ways than one. There is laughter and tears, leading to some sizzling romance. 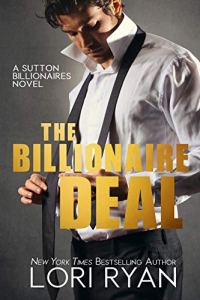 Lori Ryan is a NY Times and USA Today bestselling author who writes romantic suspense and contemporary romance with steamy love scenes and characters you won’t want to leave in the pages when the story is over.Lori published her first novel in April of 2013 and ​has fallen in love with writing.

​She is the author of the Sutton Capital Series; the Heroes of Evers, Texas; and the Triple Play Curse Novellas, a set of novellas with sexy baseball players at their core as part of Bella Andre’s Game For Love Kindle World. She has also published in Melanie Shawn’s Hope Falls Kindle World and in Robyn Peterman’s Magic and Mayhem Kindle World.

She lives with an extremely understanding husband, three wonderful children, and two mostly well-behaved dogs in Austin, Texas. It’s a bit of a zoo, but she wouldn’t change a thing. She loves to connect with her readers. Follow her on Facebook or Twitter or subscribe to her blog.