The Mounty trash has wormed her way into our circle.

We have no choice but to wait until she shows her hand, each move on the board more risky than the last. There’s no way she’s not a spy, not with her allegiance with the sociopath drug addict who walks the halls with murder on his mind.

We’re watching her every move, every choice she makes reshaping the world we live in.

The halls of Hannaford Prep have never been so deadly. The game is only just beginning and now I need to make my move.

This book opens as Harley, Blaise, Ash and Avery are at the gates to the party warehouse, They’ve come to pick up a very wasted Joey. Lip is there in her Wolf persona and she found him quite by accident as she was waiting for a payment. The scene is from Harley’s POV and it really is kind of hysterical how he wants to get her out of there and protect her. They really have no clue as to who she really is.

We all hold our breaths until the car is out of the parking lot completely. Once it’s out of view, Lips turns and holds her hand out for the bags of cash but I’m not handing them over… not when she’d probably just disappear into the night without us, so instead I head for the trunk of Morrison’s car. I tap it gently and Morrison pops it open for me.

Lips is on my ass in a hot second. “What are you doing?”

Once they’re secure I give her a look. “I told you. I’m not leaving without you.”

She might be a blank slate around the gangsters down here but her emotions are all over her face for me. I try not to crow over that fact, but she gives me so fucking little to work with it’s hard not to gloat.

She huffs and snaps, “Fuck. Fine, leave it open. I have the rest of my stuff here too.”

I nod and walk over to where the rest of her bags are, where the guy who was flirting with her when we first arrived is still standing and watching us both. As I walk up he takes a step forward, over the bags, and crosses his arms.

I’d love nothing more than to take some of my frustration at this fucking night out on him with my fists. To just smash that longing look he keeps throwing at Lips right off of his fucking face.

So I smirk at him and watch him roll his shoulders back, ready to throw down over some bags and the Mounty.

Except then Lips walks over and says, in a voice I’ve never fucking heard outta her with all its teasing and husky tones, “Luca, it’s fine. My feet hurt and I need a bath.”

She fucking pouts at him, flirting right back, and he leans down and brushes a kiss against her cheek without breaking eye contact with me.

I don’t know the where or the how of it, but I’m gonna fucking kill him.

Lips steps around me to grab her bags and then shoves one into my chest with a look.

I’ve already marked him for death.

As we walk over to the car, the asshole calls out, “I’m going to miss that ass while you’re gone, princess.”

Lips laughs as I turn back to glare at him, wishing so fucking badly that Avery wasn’t down here and there weren’t a dozen other gangsters here watching because they’re the only things stopping me from taking the asshole down.

“You get more ass than the average Mounty street girl on a Saturday night, Luca. I’m sure you’ll survive without mine.”

What the fuck is that supposed to mean?

The asshole grabs his chest with another flirty grin and I get the car door open for Lips, ready to shove her in and leave.

I’m gonna spend the rest of the year convincing Avery to get the Mounty to stay with me next summer, as far away from this place as fucking possible.

Lips startles at the sight of the Beaumonts in the backseat and darts around the car to Avery, chuckling when Floss opens the door to her straight away and sliding right in.

The moment I get in the back and shut the door, Morrison takes off, as eager as I am to get the hell out of the slums.

The girls start whispering amongst themselves and I use an arm to help Ash prop Joey up so the cunt doesn’t choke on his own tongue.

I wish the fuck he would though.

“Where should I drop you off, Mounty? Feel free to tip me for my services,” drawls Morrison. I hear Avery snort at whatever face the Mounty has pulled and for some fucking reason that only pisses me off more.

“She’s coming back to the hotel with us,” I say.

Ash turns on me with a scathing look and snaps, “Why?”

“Thank you, Lips, for finding my coked-up brother and getting him out of danger before he got himself stabbed by an angry Mounty girl for not keeping his hands to himself,” Lips says, the sarcasm dripping from every word.

Ash doesn’t know the meaning of backing down. “Thank you, Mounty, for traipsing around the docks dressed like a slut and tripping over Joey. Do all your clients pay you in large bags of dirty money? Is your puss really that good?”

“Ash, shut your mouth.” Avery turns in her seat to glare at him.

I ignore Ash’s shitty mood completely and lean forward in my seat until I can get half a look at her jammed into the seat with Floss. There’s more important shit to know than the fucking money.

I can figure that shit out later and when it comes to the Bay, there’s more than a dozen reasons she could be getting paid and each one more dubious than the last.

“Who was the guy with your bags?”

“Luca. He’s… he works for the same guy your uncle does. We’ve known each other forever.”

Like I give a fuck about who he works for. “Have you fucked him?”

Her eyes narrow at me. “How is that any of your business?”

Blaise tips his head back and laughs, a total fucking cover-up because I know he’s just as fucked for her as I am. “How many of those Mounty guys have you fucked?”

“Why do either of you care?” Avery says in her most dangerously sweet tone and there’s absolutely fucking nothing I can say back to that.

Not in this car with the rest of them, and certainly not while Lips still looks at me like I’m the biggest fucking asshole she’s ever seen.

This year is going to be a fucking nightmare.
Bree, J. Make My Move (Hannaford Prep). Kindle Locations (162-206). Kindle Edition.

This book follows Make Your Move in context and I was truly amazed at how clueless the guys really were. Without having the insight of the conversations between Lips and Avery there’s no way for the reader to know either.

From Joey trying to get to her, Lance trying to claim the bet on sleeping with Lips, to discovering she’s the Wolf and all the rest of the crazy, this was a fun read. All the twists, turns, fights and even them discovering Lips is clueless they want her truly had me giggling.

I would recommend reading Make Your Move first though so you aren’t in the dark like the guys.

Click the Cover for Buy Links and More!
The Complete Series 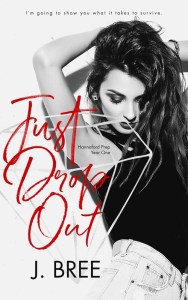 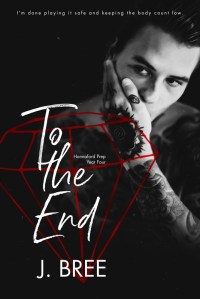