Jenna Donovan grew up in a world of great wealth and privilege. Powerful men and women from all over the country attended the lavish parties that her stepfather hosted on their Montana ranch. But the night of one party, one of those men crept into her bedroom, blindfolded her and viciously raped her, threatening to kill her if she spoke out. Years of therapy have helped her deal with it but she still freezes at the thought of an intimate relationship. Now she’s a true crime writer specializing in unsolved rape cases, determined to find others similar to hers and track down the rapist. When she uncovers several committed over the past fifteen years, she knows she must return to Montana to find her answers.

Medically discharged after twelve years in the SEALs, Scott Nolan doesn’t know what to do with himself. There’s not much in civilian life for a former sniper. Then a friend puts him in touch with Hank Patterson who heads Brotherhood Protectors and he feels as if he’s found a home again. He’s just finished his first assignment when Hank receives a call from Grey Holden, head of The Omega Team in Tampa, who asks him to have someone keep an eye on Jenna. Good thing, too, because she’s hardly settled into her rental cabin before someone leaves a threatening note under her windshield followed up by a dead skunk on her doorstep with another note.

Good thing the cabin has two bedrooms because Hank insists Scott move in with Jenna so he can monitor her twenty-four/seven. As Jenna gets closer to finding her answers, the attempts on her life increase. But is she in more danger from the unknown person or from Scott, himself a tortured soul but who wakens feelings she is afraid to face may be the only one who can get past her emotional fear and teach her how to love?

I started this series at the end not the beginning, so I decided to go to the very beginning. This is the first of two prequels to the Heroes Rising series written by Desiree Holt in the Brotherhood Protectors World.

This book opens a whole can of worms as Jenna Donovan realizes she has to go back to Montana and flush out the evil there. The emails she received brought back memories better left buried. She couldn’t in good conscience ignore them. After a flashback to the trauma she experienced that had her fleeing when she turned eighteen discusses what she’s going to do with her friend Gray Holden. Head of the Omega Team he arranges for Brotherhood Protectors to provide a bodyguard for her, Scott Nolan will pretend to be her boyfriend. Although Jenna protests, Gray is adamant that she needs the protection as going there would probably make her a target.

The closer Jenna gets to her hometown in the Crazy Mountains of Montana the worse the flashbacks become. She manages to get the panic under control before she pulls into the area of the cabin she’s rented. There she gets the first look at Scott.

She was a client. His protectee. Despite the fact that other members of the agency had connected that way, it violated his own personal code of conduct.

But damn! At first contact there was something about Jenna Donovan that flipped a switch that had been in the Off position for a very long time. As he took in the nicely rounded ass, the compact body, and the determined set of her shoulders, he told himself he was just assessing her to see how fast she could move in an emergency.

But he wasn’t going there. He had a job to do here, and he had to treat it just like a sniper assignment. No distractions. Use that famous personal discipline.

Tell that to the sudden invisible connection that popped up. And worse, to unexpectedly swollen cock and aching balls.

He waited for the argument that she wanted the downstairs bedroom. Of course.

“Wait. What?” She glared at him, hands on hips, irritation lining every inch of her body.

Yeah, there it was. And damn again. Instead of annoying him, all he could think of was how cute she looked when she was aggravated.

Of all the fucking luck. The woman he’d been waiting for walks into his life and she might as well have a big Hands Off sign plastered across her chest.

A body I don’t need to think of except as an object to be protected. Object. Protect. Right. Still getting that bodyguard thing fixed in my mind.

He just looked back at her and forced what Hank Patterson called his iron wall stare.

“I won’t be much protection if someone breaks in and they can get to you before I even get downstairs. You could be dead by the time I reach you.”

Her skin turned pale as she absorbed his words.

“You think whoever this is would do that? I haven’t even started digging into anything here yet. How would he even know?”

“I always prepare for trouble,” he told her. “Hope for the best, expect the worst.” He paused. “If it’s a problem for you to sleep up there, then go ahead and take the bedroom down here.” He waved a hand at the two leather couches facing a rock fireplace. “I’ll bunk out on one of those.”

He watched the play of emotions across her face as she struggled with her options. She glanced up the open stairway, and he knew she was bothered by the openness of the sleeping setup there. He wanted to tell her she could prance around naked and it wouldn’t bother him. He’d lost any interest in sex except with his hand ever since—

Quit thinking about it.

He waited for her to say something, but she just stood there, studying him as if he were an unwanted guest. Well, Hank did say someone else had made the arrangements for her. A boyfriend? A significant other? Great. Just fucking great.

“I’m concerned with your safety,” he pointed out.
“Just let me know what works for you.”

The sigh said it all.

“Fine. I’ll sleep in the loft.” Her mouth curved in a tiny grin. “But no peeking.”

“Trust me,” he snorted. “That’s at the bottom of my list. I’ll get your stuff upstairs. Then we need to go over your schedule and some ground rules.”

“Yeah. There’s one of those single-serving coffee makers on the counter. Go ahead and fix yourself a cup if you want.”

“There are pods here?” Had the landlord provided them or Scot? Somehow she couldn’t see him ambling trough a minimart laying in supplies.

“Hank’s wife shopped for supplies so you wouldn’t have to worry about it. If she got anything wrong, or there’s something we don’t have that you want, I’ll be happy to take you to get it.

“Groceries?” She sounded like a parrot. His boss’s wife had grocery shopped for her?

“Yeah. She figured after the long trip you might not be in the mood. Like I said, we can always get anything that’s not here. So go ahead and get your coffee while I take care of your luggage.

He plunked her suitcases next to the bed, along with her messenger bag then took the stairway down two steps at a time. He saw that she’d taken him up on his suggestion and fixed a mug of coffee for herself. She stood by the big window looking out into the woods, sipping from the mug and staring out at the wilderness.

He was struck again by the electric energy that seemed to zing from her body.

Forget it, idiot. This is a job, not a date.

“You can stand there and look at me all day,” she said without turning around. “But I won’t change how I look. I’m still going to be a little too short, a little too chunky, and not very warm and fuzzy.”

He didn’t know whether to be shocked or just burst out laughing. There was nothing wrong with either her height or her body, but he didn’t feel comfortable telling her that.

“First of all, I wasn’t sizing you up. Second, whoever the hell told you that needs to have their eyes examined.”
Holt, Desiree; Protectors World, Brotherhood. Guarding Jenna: Brotherhood Protectors World. Kindle Locations (286-325). Twisted Page Press, LLC. Kindle Edition.

They gain attention from the start by going into town, Jenna’s recognized by a woman she believes may have written the email that got her here.From a very uncooperative sheriff, to a group of women who like her hadn’t reported the rape and threats to them years ago, the suspense ramps up quickly.

Jenna does indeed become a target, but Scott isn’t going to let anything happen to her. His attraction to her and hers to him heats up gradually but intensely.

I’m already reading the second prequel before I continue with the rest. 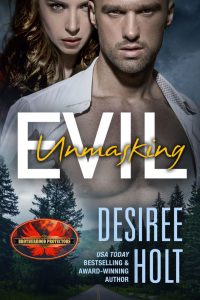