Single mother Sabrina Gervais has built a happy life with her daughter Charlotte in their eastern Long Island hometown of Holly Point. Having Charlie meant putting some of her own dreams on hold, but Sabrina is content to surround herself with family and friends, safe from the realities of the outside world. She had enough of that when the man she loved broke her heart.

Jake Killen’s career in professional hockey has brought him many rewards on and off the ice, but returning to New York brings back a flood of memories. When he sees Sabrina again, he discovers that he didn’t just walk away from her ten years ago, but also from their unborn child.

Struggling with anger, guilt, and chemistry that’s off the chart, Sabrina and Jake wonder if they can find love again and, this Christmas, make all their wishes come true.

Sabrina and Jake had a steamy and romantic time in Holly Point that summer ten years ago. She wanted to keep it from her family, but Jake wanted to be open with them since her brother Ryan is his best friend.

Unfortunately Jake had to make a choice when his ex is pregnant, he leaves Sabrina and his heart to do the right thing. By the time he realizes his mistake, the child wasn’t his, and got divorced, he felt Sabrina was better off without him.

Now he’s been traded back to New York and he’s glad to be back, although the memories are haunting him a bit. Little does he know there’s a big surprise waiting for him.

Making his way to the ice, Jake welcomed the feel of his blades hitting the surface, which was a little soft for his liking, but after being abused by a couple of dozen pairs of skates all day, it was understandable. Ryan was teaching his charges how to shoot from the point, his specialty as a defenseman, and Jake couldn’t resist the opportunity to bust on him.

“You trying to teach those kids hockey with your skating skills, Gervais?”

All the helmeted heads turned and it looked like a convention of mini storm troopers from Star Wars. Jake smiled and skated over, taking off his glove and shaking Ryan’s hand. “How are you, man?”

Ryan looked the same as always, big, broad, and intimidating as hell. He was the nicest guy around, but there was no one more physical on the ice. Coming in contact with all 220 pounds of Gervais at center ice, or digging a puck out of the boards, could send a guy to the hospital.

“You are the last person I expected to see, Killen. Welcome back.”

The kids started buzzing and looking at each other. They’d caught his name. “Guys,” Ryan said. “You have one of the best centers in the game standing in front of you. You all know Jake Killen? He’s going to do some drills with us for the last half hour.”

The heads bobbed up and down and he heard the excitement in their voices. It was a buzz, no doubt about it when a kid was excited to meet him. He remembered how he felt about his favorite players. Some of the old time hockey guys weren’t always so nice, though, so meeting them was a letdown. Jake vowed that would never happen with him, always making sure a kid felt happy they’d met. He looked over at Ryan and saw the speed demon tugging on his sleeve. He bent down and from the way his friend and the boy were looking over, the conversation was about him.

A pat on the back from Gervais sent the kid, Charlie George had said, back to his group to play. Jake took over after the shooting drills and worked with the players on skating. Balance drills, sprints, and power stops had everyone huffing, puffing, and laughing.

Even Jake was huffing and puffing, a sure sign he had a lot of work to do if he was going to be playing again by the January.

Parents were filtering in, watching the end of the drills and he wondered how that would feel—watching his kid grow up, do things. Once the clinic ended, Jake signed a bunch of helmets, sticks, and jerseys, got lots of high fives and thank yous, before the group dispersed. They were nice kids, Jake wished he gotten there earlier.

Ryan skated over and little Gervais, who proved to be the best skater on the ice, was right next to him. The kid stuck close to Ryan, helmet on, and head down. Jake wondered what was up. He couldn’t imagine Ryan Gervais, the life of the locker room, having a shy kid.

“Jake, I want to introduce you to someone.” He looked down. “Charlie, take off your helmet.”

Charlie started working the straps and to Jake’s surprise, when the headgear came off, a long, braided pony tail fell out. Charlie was a girl—a badass, super-fast, hockey-playing girl.

Ryan must have seen the shock on his face because his eyes flashed right before the corner of his mouth tipped up. “This is Charlotte. My niece.”

Whoa. His niece? “Hi, Charlotte. Or did I hear you prefer Charlie?”

The kid looked up and Jake had to have stepped back. Dark brown hair, full lips and large green eyes dominated her pixie face. It hit him like a stick to the head. Charlie looked just like Sabrina. Jake nodded and smiled as best he could, having just received one of those kicks in the ass he’d been thinking about earlier. He was glad she’d found someone after he screwed up, but then he started to run numbers in his head and there was no way…

“So,” he started. Not really wanting to ask, but not being able to stop himself. He had to know. “How old are you?”

It didn’t take long for Jake to do the math. Jesus, if what he thought…

Jake’s back tensed at the voice echoing through the arena.

“Mom!” Charlie took off toward the tunnel and Jake turned to see the love of his life, the woman he never thought he’d see again, hugging her nine-year-old daughter. Bree had just turned twenty-nine. Jake’s eyes were locked on the scene and when Sabrina looked up, the happy expression dropped away and pure shock and fear washed across her face. Her reaction told him everything he needed to know.
Moon, Jeannie. This Christmas (Holly Point Book 1). Tule Publishing Group. Kindle Locations (211-248).Kindle Edition.

Getting through to Sabrina isn’t easy and Jake is angry that she kept her pregnancy from him. He’s determined to know his child, Charlotte, and win back her mother’s heart.

Emotional with laughter, tears, memories and some sizzle! 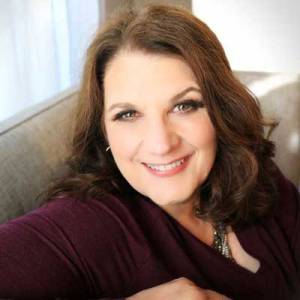 USA Today bestselling author Jeannie Moon, has always been a romantic. When she’s not spinning tales of her own, Jeannie works as a school librarian, thankful she has a job that allows her to immerse herself in books and call it work. The author of sixteen contemporary romances, for Tule Publishing and Penguin Random House, Jeannie is married to her high school sweetheart, has three grown kids, three lovable dogs and is a lifelong resident of Long Island. If she’s more than ten miles away from salt water for any longer than a week, she gets twitchy.